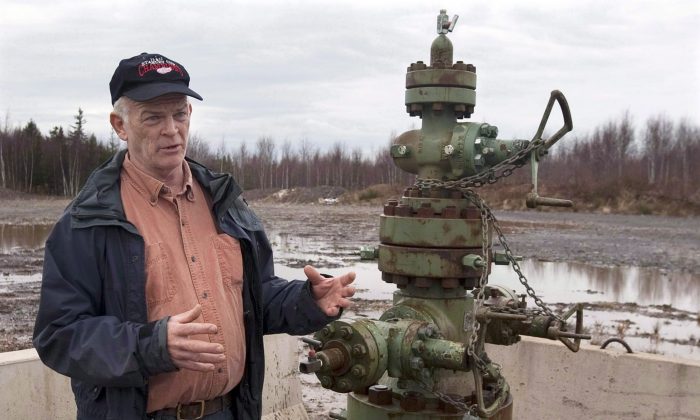 Nova Scotia resident Ken Summers stands next to a wellhead for an exploratory natural gas well near his home on Dec. 6, 2013. A new Wikipedia-style website aims to provide information on the 4 million oil and gas wells throughout Canada and the U.S. that have been drilled since 1859. (The Canadian Press/Andrew Vaughan)
Canada

Finding information about oil and gas wells is about to become easier thanks to a new website that aims to provide data on all the wells drilled in Canada and the United States since 1859.

The website, dubbed WellWiki, will provide already public but hard-to-find details on oil and gas development in a given region, including any infractions or enforcement actions.

Joel Gehmen, an assistant professor at the University of Alberta’s business school, says the website will present the information “in a kind of snapshot form” to make it easy for people to find out what’s going on with a particular well.

He believes having easy access to such information is important, especially now that fracking has become such a controversial and polarizing issue, with some believing it’s a financial boon while others are concerned about the environmental fallout.

“I’m interested in helping to create a platform where these kinds of issues can be sorted out and I believe part of that is better information on all sides,” he says.

He estimates that since the Drake Well, America’s first commercial oil well, was drilled in Pennsylvania in 1859, about 4 million wells have been drilled in North America—and he plans to put them all on WellWiki.

“I have this kind of United Way thermometer in my mind and my goal is to get 100 percent of all those wells on the site,” he says.

Currently, the site hosts information for roughly 250,000 wells in Pennsylvania, with wells in West Virginia, New York, and Ohio to be added next, followed by wells in Alberta, British Columbia, and Texas.

“My approach right now, en route to the 4 million, is to try to cover those states and provinces where it seems like the topic is perhaps most controversial or there’s the most discussion and debate around it,” Gehman explains.

On a single page, visitors to the site can find information such as the age of the well, whether it has produced any oil or gas, whether inspections have been done, fines incurred, or violations committed, and details about waste and the amount of truck traffic to and from the well.

Users can contribute information by adding photographs, links, or text, and keep each other informed of developments at wells that are controversial or have drawn attention.

“I expect that just like with Wikipedia, users will come in and put links to other news stories that are occurring and follow the events that transpire and build out really robust, comprehensive coverage of particular wells or particular incidents and events that are happening in their communities and that they care about,” says Gehman.

“I think that’s the real opportunity.”

Gehmen began compiling information on oil and gas sites in Pennsylvania, where he completed his PhD. He then decided to expand it to include all of North America. Working with him on the project, which is supported by a federal government grant, is Dror Etzion, a business professor at McGill University.

The site is still in development, and Gehman says he hasn’t done much outreach or received any feedback from industry or environmental groups as yet.

But it has drawn praise from Dan Weaver, director of public outreach at the Pennsylvania Independent Oil & Gas Association, an industry group that represents hundreds of oil and gas producers and service companies.

“This is great! It’s interesting. I like the premise behind it,” Weaver told Inside Climate News, a New York-based magazine.

Weaver said the site could help landowners find out how much gas is being produced by wells on their land, while well operators could use it to help residents in an area new to drilling understand how the industry operates.

Gehman says that after he has all wells in Canada and the U.S. documented on the site, he may expand to include those in other countries.

“I’ve had some conversations with folks who were involved in unconventional shales in China and in Germany. It’s a little bit speculative at this point, it’s still very early, but there’s no reason why in principle this couldn’t go beyond just the United States and Canada.”