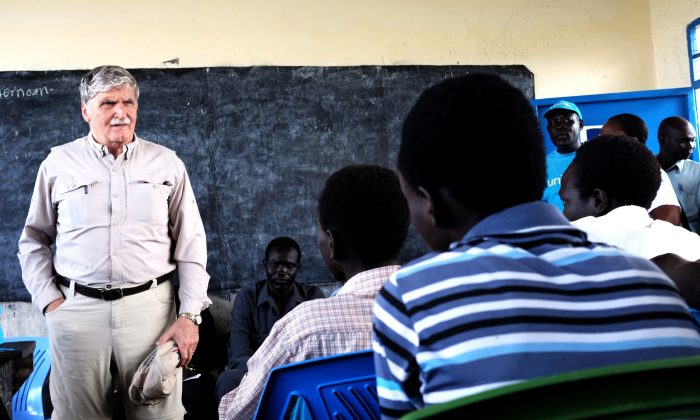 ‘New Way of Peacekeeping’ Will Curb Use of Child Soldiers, Says Dallaire

Despite critics lambasting Ottawa’s plan to spread out Canada’s peacekeeping military and police resources over the next five years, retired lieutenant-general and former senator Romeo Dallaire says the plan will make Canada a world leader in ending the use of child soldiers in war.

Prime Minister Justin Trudeau announced at a peacekeeping summit in Vancouver last week that Canada would not be committing the 600 military troops and 150 police officers it pledged last year for U.N. peacekeeping missions.

Instead, the Trudeau government has offered a “smart pledge” including skilled training of 200 troops, helicopter and air support, a boost in female troop deployments, and a focus on demilitarizing child soldiers, although it could take six months or more for discussions to begin on when and where those capabilities are needed.

It’s a move that has critics saying the government not only broke its promise but has jeopardized any chance at making a significant impact in bringing peace and security to regions such as Mali, Congo, Central African Republic, and South Sudan—all conflict zones where it had been speculated for months that Canada would send a sizable military and police force.

But Dallaire, who served as Force Commander with the United Nations in Rwanda, says such criticism is too near-sighted, noting that peacekeeping has changed drastically in recent years and instead of putting “boots on the ground” in conflict zones, it is more effective to have Canadian military offer its smarts and skills.

“What we are seeing now is a recent, adaptive, and new generation of capabilities, competencies, skills, and knowledge given to peacekeepers,” he said in a phone interview.

“Countries in conflict zones want the training and the skills, not battalions, to be able to handle the conflicts better, and that’s exactly what we are doing and that moves us to a much higher plain than by simply providing boots on the ground.”

The Romeo Dallaire Child Soldiers Initiative based out of Dalhousie University has teamed up with the U.N. and the Canadian government to create the Vancouver Principles—an international strategy to end the use of child soldiers that is meant to be adapted by all contributing nations in the U.N.

Dallaire and the international community have been working on a global strategy to protect children in conflict for some time. But it wasn’t until last month, in the lead-up to the official announcement of the Vancouver Principles, that many countries rushed to sign up, he said.

“There’s 55 countries on board now, and no other international engagement has had that many countries buy in that fast in a month and a half. It is off the scale of what would seem to be normally possible.”

The strategy means that for the first time in history there will be one guide for countries on how to address and diffuse certain scenarios involving child soldiers, a set of tactical solutions to prevent gun-to-gun combat, and a training manual that will change how military and police use their tactics.

He said the Canadian army has already rewritten its doctrine and is preparing new training programs to include the guidelines from the Vancouver Principles.

“Before, the children were often found as belligerents and it often ended up with children dying or soldiers not reacting and losing ground,” Dallaire said. “If the children end up dying, that has a horrific effect on the soldiers psychologically.”

He added that child soldiers are being used “even more ruthlessly” in war than ever before.

“One of the things that we are seeing in mission areas is the extensive recruitment of children as weapons of war.”

Walter Dorn, a peacekeeping expert at the Canadian Forces College in Toronto, commended Dallaire’s Child Soldiers Initiative and the Vancouver Principles approach to helping reduce child soldiers, but believes “it’s only a small slice” in keeping the peace.

“We can’t use our know-how and our smarts if we don’t have experience on the ground. We can’t become ivory tower academics with no field experience in U.N. operations and pretend that we are doing training,” he said.

“It’s taken so long to get to this point and now we are even going backwards. There are fewer Canadian military personnel in U.N. peacekeeping than any time since the creation of peacekeeping forces.”

But Dallaire said that even if what the government is pledging seems small, all that is required is 10 to 20 troops with this training to go into conflict zones and empower other countries’ military with their intelligence and strategy.

He recently came back from touring five African nations with Defence Minister Harjit Sajjan, and he said these countries are hungry for Canada’s smarts and know-how.

He gave South Sudan as an example where 10 troops have been deployed to offer tactical assistance, which he says will help reduce the number of child soldiers by training the South Sudan army.

“What we are doing is bringing the international community and the contributing countries into the realm of having a new capability and a new way of peacekeeping,” Dallaire said.

“I am articulating without an iota of doubt that finally we will not only be involved in picking up the kids that survive after they’ve been demobilized to rehabilitation and integration, but we are actually going to reduce the number of children going into war. And that has not happened since they have been looking at the problem since the early ’90s.”