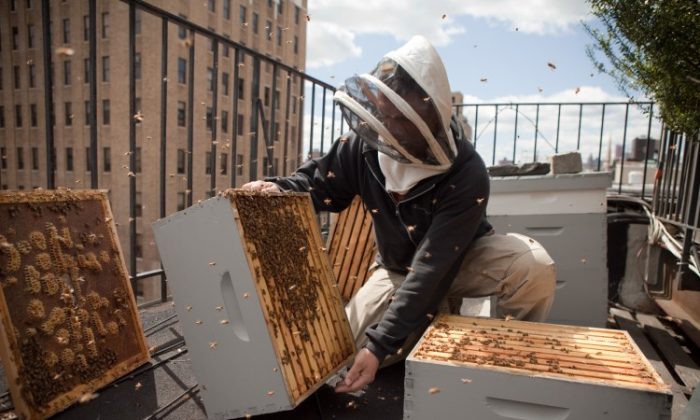 Plenty of Learning Options for New Wave of Urban Beekeepers

“Once urban beekeeping became legal [in New York City] … a lot of people just got the bees and they were very, very excited about it,” said Andrew Coté, founder of two groups dealing with bees, including the New York City Beekeepers Association. “And two weeks later they forgot that they had bees on the roof.”

During a talk at the Horticultural Society of New York, Coté described the classes the association offers.

“[You] learn about how to be safe and responsible for the bees and the neighbors and yourself,” said Coté.

New beekeepers can get 12 hours of instruction spread out over four consecutive Sundays for $150, including how to construct a bee hive, general maintenance, and diseases and treatments.

With his other organization, Bees Without Borders, Coté teaches beekeeping as a sustainable way to make money in countries such as Iraq, Fiji, and Kenya. In Brownsville, Brooklyn, and East New York, the group helps install hives and gives free classes.

Hives have been popping up on buildings citywide since beekeeping was legalized in March 2010. The New York City Beekeepers Association is responsible for many.

Beekeepers must register with the Department of Health. Currently, the department has 79 registered beekeepers with a total of 129 beehives.

When bees feel overcrowded, or something is wrong within a hive, the queen bee leaves the hive. She takes around one-third to one-half of the bees with her to look for a new home. Most swarms happen in May or June.

“They’re docile when they’re swarming,” said Coté. “But there has been a lot of swarms in New York City, basically because we have a lot of new beekeepers who are inexperienced.”

The beekeepers association has a swarm hotline, and some members get a text when someone calls it.

“We all get excited,” said Coté. “We go and take it and relocate it somewhere. We were getting swarm calls almost every day last year. That’s because it was the second year beekeeping was legal, and the first year bees tend not to swarm.”

Preventing swarms is addressed in the class. Beekeepers must be able to respond immediately to control bee swarms, states the Department of Health in their beekeeping rules. In Langstroth hives, the most common system, boxes that resemble dresser drawers are stacked on top of each other. The best way to ease overcrowding is to add a box to the stack.

Guillermo Fernandez, a member of New York City Beekeeping, which offers free classes, also talked about swarms. He noted that another way to prevent them is to move frames around. “But New York City has always had swarms,” he said. “There are feral bees. People are just paying more attention now.”

The group has more than 1300 members and has had free course since 2008, in partnership with the Department of Parks and Recreation, at the Central Park Arsenal. The course begins in the fall and ends in the summer. Besides more than 45 hours in the classroom, it features hands-on training throughout the city, including working with hives and extracting honey.

Fernandez said that new beekeepers should “connect with a local beekeeping group, where they can hook up with a mentor that can answer some of the questions that a new beekeeper can run into.”

Members of the Backwards Beekeepers of NYC teach Beekeeping 101 at a variety of venues, such as New York Botanical Garden, Brooklyn Brainery, and 3rd Ward.

The organization will also hold a free demo of wax processing and clarifying, which enables the wax to be made into things such as candles, hand salve, and bee balm, on Feb. 27 at 8 p.m. at the Brooklyn Brainery.

For those beekeepers looking to take the next step, Tim O’Neal, co-founder of the group, will join the Brooklyn Grange, a rooftop farm in Brooklyn, in offering beekeeping apprenticeships this spring.

“We want people who are both interested and committed, and who have already done research on their own,” said O’Neal. “It’s not a beekeeping 101 course. It’s for people who want to be committed to beekeeping.”