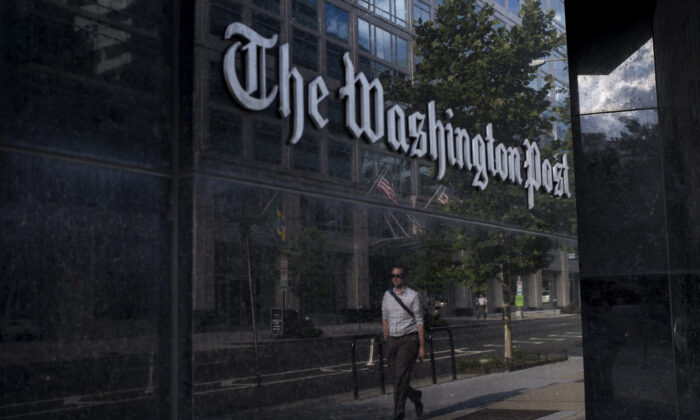 The Washington Post’s newly named national editor has recused herself from any coverage involving the FBI and its parent department, the Department of Justice.

Matea Gold was announced as the paper’s national editor on Jan. 26.

Gold is married to Jonathan Lenzner, who became the chief of staff to FBI Director Christopher Wray in December 2021 after serving as the acting U.S. attorney for the District of Maryland.

Because of Lenzner’s position, Gold “has recused herself from overseeing coverage of the agency or the Justice Department,” a Post spokesperson told The Epoch Times in an email.

Steven Ginsburg, the paper’s managing editor, will take on the responsibility that Gold has chosen not to handle.

“Matea brought this to the managing editors’ attention back in December when it was clear her husband was going to accept the job,” the spokesperson added. “It is a tribute to her leadership and integrity that she proactively made this recommendation. We have every confidence in Matea’s professionalism and high standards.”

The recusal was first reported by RealClearInvestigations and was not mentioned in the paper’s announcement, nor was there any sign that it had alerted readers to the conflict of interest.

“The managing editor who will oversee this coverage has been running it the last five years as national editor, so there is not a change here for readers,” the Post spokeswoman said.

Gold spent four years as the Post’s national political enterprise and investigations editor, “running some of The Post’s most sensitive stories,” the announcement said. Those included stories dealing with the FBI’s investigation into the alleged collusion between Donald Trump’s campaign and Russia.

Special Counsel John Durham is probing the origins of the investigation, which was based on a flimsy dossier compiled by an ex-British spy hired by the campaign of Hillary Clinton, Trump’s opponent in 2016.

The Post corrected several stories about the dossier in November 2021 after court documents undermined the assertions in the articles.

Gold also helped create an illustrated version of Special Counsel Robert Mueller’s report and an investigative series about the Jan. 6 breach of the U.S. Capitol.

“Reporters and other editors gravitate to Matea for guidance and direction. She is relentless in pursuit of key facts and larger truths and compels reporters to do their best work, whether by spotting critical targets or providing unwavering support. She is as competitive as they come, never wanting to get beat, always supporting her staff,” the Post said.

“We would not want a national editor to be covering the FBI when her husband has a prominent role in it,” he said.

Similar conflicts have arisen in the past between media employees and their spouses. One of the highest-profile is the relationship between Alan Greenspan and Andrea Mitchell. When they married in 1997, Greenspan was chairman of the Federal Reserve Board. Mitchell was and continues to work for NBC, where she for years largely avoided covering news involving her husband.

In such cases, media outlets have to make tough decisions, including how often to address the matter, according to Schotz.

“I don’t know if there’s a good answer, but at least be thinking about, how do you take the steps to address the actual conflict?” he said.