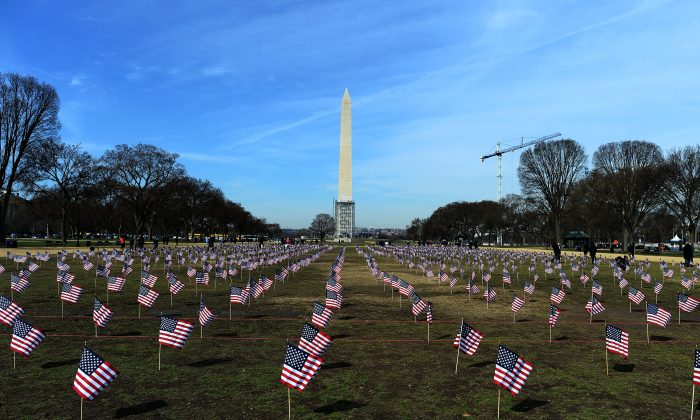 Some 1,892 American flags are installed on the National Mall in Washington, DC, on March 27, 2014. The Iraq and Afghanistan veterans installed the flags to represent the 1,892 veterans and service members who committed suicide this year. (Jewel Samad/AFP/Getty Images)
US

An average of 20 veterans committed suicide every day in 2014, says an analysis by The Department of Veterans Affairs (VA) released on July 7.

Of all the veterans who committed suicide in 2014, 65 percent of them were 50 or older (for reference, the Gulf War ended 26 years ago).

Veterans accounted for 18 percent of all adult suicides across the country, a decrease from 22 percent in 2012.

The VA examined over 55 million veteran records across all states in the country from 1979 to 2014, the largest analysis yet of veteran suicides.

A previous 2010 analysis looked at three million veteran records from the 20 states in which they were available. The 2010 data estimated the number of suicides was 22 per day.

Compared to adult civilians, since 2001 veteran suicides increased by 32 percent, while ordinary citizen suicides climbed by 23 percent, the VA says. After controlling for age and gender, veterans were deemed at greater risk of suicide deaths by 21 percent.

“One Veteran suicide is one too many, and this collaborative effort provides both updated and comprehensive data that allows us to make better informed decisions on how to prevent this national tragedy,” said Dr. David J. Shulkin, VA under secretary for health, in a statement.

“We as a nation must focus on bringing the number of Veteran suicides to zero,” he added.

The suicide rate among veterans who used VA services has increased 8.8 percent since 2001, while the numbers for those who didn’t use VA resources increased by 38.6 percent.

The overall suicide rate in the United States has dramatically increased in recent years and is the tenth leading cause of death.

A report released in April by the Centers for Disease Control and Prevention (CDC) shows a 24 percent increase in suicide in the general population from 1999 to 2014.

The final VA report on veteran suicides will be released later this month.