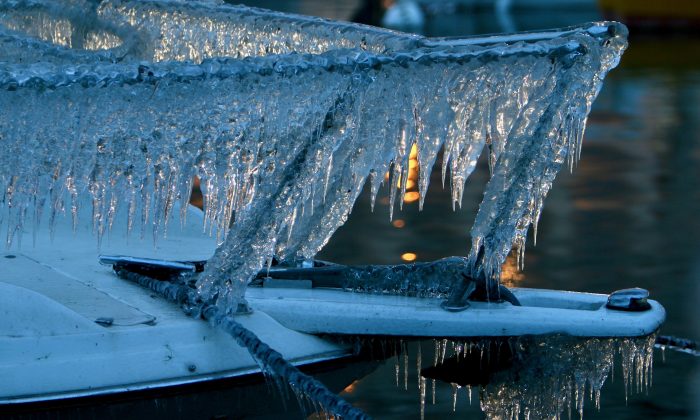 A frozen-over sailboat, symbolically related to the predicament of the USS Little Rock, which remains stuck in a Canadian port due to ice. (CC0)
US News

A brand new warship of the US Navy is stuck in Montreal, Canada for the winter, after its voyage to Florida was held up by frigid weather.

The USS Little Rock hit the water in Buffalo on Dec. 16 and set out for Mayport, Florida—home port for the 118-meter Freedom-variant vessel, Canada’s CBC reported.

Instead, heavy ice caused the ship to make fast to dry land, forcing this latest member of the Littoral Combat Ship class to remain docked in Montreal’s Old Port area since Christmas Eve.

Newly-commissioned USS Little Rock to spend winter in Montreal after getting trapped in ice https://t.co/W9jad1Cs1E

“The temperatures in Montreal and throughout the transit area have been colder than normal, and included near-record low temperatures, which created significant and historical conditions in the late December, early January time frame,” Hillson told the Toronto Star.

“Keeping the ship in Montreal until waterways are clear ensures the safety of the ship and crew, and will have limited impact on the ship’s operational schedule.”

The navy spokesperson did not provide details on how common it is for its ships to face winter-related delays, but did say that previous ships did not face problems in December.

The ship’s crew has been equipped with cold weather clothing and will focus on mission training while the delay continues.

The hold-up will have “limited operational impact,” Hillson said and added that the vessel has been furnished with temporary heating units and 16 de-icers to keep the “innovative” aluminum hull from freezing over.

Just announced: USS #LITTLE ROCK #LCS 9 to stay in #Montreal until ice in the St Lawrence River & Gulf breaks up enough to allow safe transit. Ship put in 24 Dec for Christmas then the river really blocked up. Navy notes stay “will have limited impact on ship’s operational sked.” pic.twitter.com/rkS8GtxpFQ

According to the New York Post, other US Navy members like the Littoral Combat Ship class faced technical problems, including engine snags and automation-related failures.

The aluminum hull, the New York Post suggests, may be a factor in why the ship “can’t make it to the open seas even with some help from Navy icebreakers.”

The situation comes on the heels of a spate of collisions that have plagued the Navy’s 7th Fleet, which reports attribute to crew fatigue and deferred maintenance and training.

Seven of the 300 sailors onboard the USS Fitzgerald died in a June 17, 2017 collision with a significantly larger civilian container vessel off Japan.