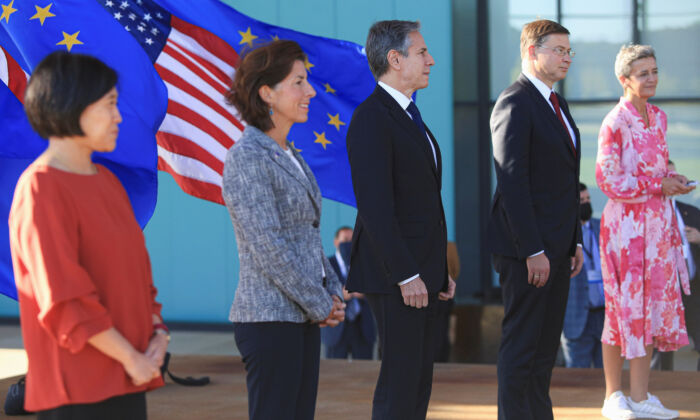 It marks the first meeting of the newly-established U.S.-EU Trade and Technology Council (TTC), a group that President Joe Biden launched at the Group of Seven summit in June.

“We stand together in continuing to protect our businesses, consumers, and workers from unfair trade practices, in particular those posed by non-market economies, that are undermining the world trading system,” according to the statement released on Sept. 29 after the first day meeting in Pittsburgh, Pennsylvania.

While the joint statement contained no direct references to China, analysts suggested that the TTC was designed to deal with Beijing’s unfair trade practices and to curb its hegemonic ambitions.

The United States and EU had expected China to transform into a market economy after it joined the World Trade Organization in 2001, but things did not work out that way, said Cheng Chin-mo, chairperson of the Department of Global Politics and Economics in TamKang University in Taiwan.

The Chinese regime has taken advantage of the free market—typically through domestic subsidies and unfair trade practices such as intellectual property theft and dumping—to boost its economy and seek technological advances, Cheng said.

To make itself a dominant player, the Chinese regime has established a network of relationships in Europe to “weaken and divide” traditional Western alliances, Cheng noted. This included launching the “17+1” platform to intensify cooperation with EU members in Central and Eastern Europe, and investing or buying stakes of businesses across Europe through state-owned or state-controlled companies.

The West is concerned with Beijing’s increasingly aggressive behavior as it refuses to play by international rules and follow fair economic practices, said Lee Yeau-tarn, a professor at the Graduate Institute of Development Study in Taiwan’s National Chengchi University.

This meeting of democratic allies forms part of a burgeoning unified front against the Chinese regime, especially in the technology field, Lee said.

On Wednesday, senior cabinet officials from Washington and Brussels pledged to cooperate on trade issues, including screening foreign investments, maintaining export controls, and addressing the global shortage in semiconductors. The parties also said they would develop artificial intelligence (AI) technologies that are “innovative and trustworthy.”

Through forging common trade and technology standards, the two sides could target Beijing’s ambitious industrial strategies such as the “China Standards 2035” and “Made in China 2025,” said Su Tzu-yun, a senior analyst at Taiwan’s government-funded Institute for National Defense and Security Research. The two national plans serve as the guiding framework that drives Beijing’s aggressive economic and technological practices.

Under the “Made in China 2025″ initiative, China’s goal is to achieve self-efficiency in 10 high tech sectors by the year 2025. The plan drew intensified scrutiny during the Trump administration’s trade war, causing Beijing to downplay the importance of the initiative. Analysts, however, say the plan is still being carried out.

Beijing rolled out “China Standards 2035” in March 2018 during a meeting held at the state-run Chinese Academy of Engineering. The plan’s objective is for China to dominate new technologies, including AI, big data, and IoT (Internet of Things), by developing technology standards and exporting them to the international market.

The two plans pose threats to the free world, Su said, pointing to security risks posed by Chinese technology that could be used by the regime for spying or disrupting critical infrastructure around the world.

In recent years, the United States and its allies have been increasingly wary over security issues related to Chinese software and hardware, ranging from popular video app TikTok to telecom equipment provider Huawei. Critics say that these companies are ultimately beholden to the Chinese Communist Party and are thus unable to prevent their technology from being used by Beijing for malign purposes.

“It’s a new cold war,” Lee said, adding that “ideological warfare” between the free world and the Chinese regime is an “inevitable” situation.

Luo Ya and Frank Frang contributed to this report.