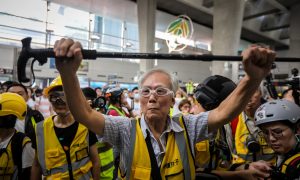 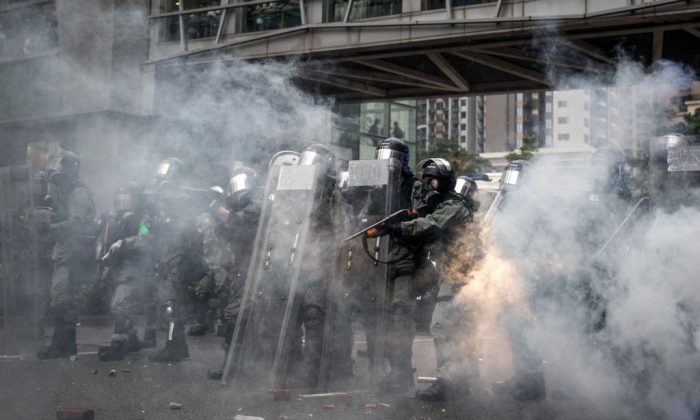 “America ought to recognize the human rights and dignity of all people, and that means we ought not to allow American companies to sell this equipment to foreign governments when we see evidence that it is being used for immoral and unjust purposes,” U.S. Rep. Jim McGovern (D-Mass.) said in a press release.

The bill also stipulates that the U.S. secretary of state issue a report to Congress within 90 days after enactment, detailing all the defense articles, services, and munition items exported to Hong Kong in the last five years.

Protests in Hong Kong are currently in their 14th consecutive week. They began in June against an extradition bill that citizens feared would erode the city’s autonomy. The bill proposed to allow Beijing to seek extradition of suspects and place them on trial in Chinese courts, where the rule of law isn’t observed.

While Hong Kong’s leader Carrie Lam announced the bill’s formal withdrawal last week, protesters have continued to stage rallies and marches, particularly to voice concerns about police tactics. Many, for example, place a patch over their right eye in solidarity with a female volunteer medic who was hit in the eye on Aug. 11 by a police bean bag round.

Protesters are pushing for Lam to establish an independent commission to investigate police actions—a demand that Lam has repeatedly rejected, claiming that the police’s internal watchdog, the Independent Police Complaints Council, will do a sufficient job.

In 2013, a report by the U.N. Human Rights Commission questioned the IPCC’s independence and concluded that it “has only advisory and oversight functions.”

Amid escalating violence in Hong Kong, U.N. High Commissioner for Human Rights Michelle Bachelet called for an investigation on Aug. 13, after finding credible evidence of Hong Kong police “employing less-lethal weapons in ways that are prohibited by international norms and standards.”

“No American company should be profiting off of anti-democratic, violent tactics abroad,” Khanna stated in the press release.

Smith also condemned the Hong Kong police use of force: “Peaceful demonstrations are not riots; it is unacceptable to use violence against non-violent protesters. … Until such a time when it becomes clear that American products are not being used to repress the free people of Hong Kong, Congress must stop the flow of these exports to the government of Hong Kong.”

In July, images of used tear gas canisters from the site of clashes between Hong Kong police and protesters began circulating online, including those posted by local activist Joshua Wong, who first rose to prominence in 2014 as a student leader in the pro-democracy Umbrella Movement.

The canisters identified a Pennsylvania-based company—NonLethal Technologies Inc.—as the manufacturer.

Local police violence against journalists covering the protests has also drawn international concern. On Sept. 6, the Brussels-based International Federation of Journalists, the Hong Kong Journalists Association, and over 50 other journalist unions, including the U.S.-based National Writers Union, issued a joint letter to Lam expressing concern about the freedom of the press in Hong Kong.

Many Twitter users, including those from Hong Kong, left messages expressing gratitude for McGovern’s support for protesters after the senator tweeted about the bill introduction. Some also urged Congress to pass another bill, the Hong Kong Human Rights and Democracy Act.

The bill, introduced in June, would require the U.S. secretary of state to annually certify that Hong Kong is “sufficiently autonomous” from mainland China to merit the special trading status the United States has afforded it.