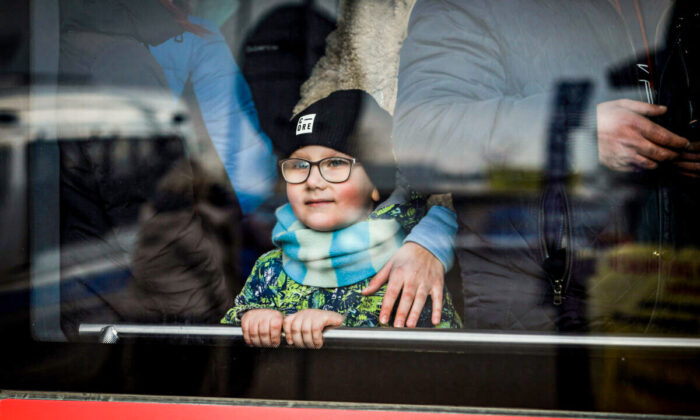 A Ukrainian refugee boy looks out a bus window after arriving in Poland through the Medyka border crossing on March 10, 2022. (Charlotte Cuthbertson/The Epoch Times)
UK

More than 3,000 visas have been issued to Ukrainians seeking refuge in the UK, with “tens of thousands” potentially set to benefit from a new humanitarian scheme, UK Levelling Up Secretary Michael Gove has said.

Gove also announced that local authority areas will be entitled to more than £10,000 ($13,038) per Ukrainian refugee.

“Additional payments” will be available to support school-age children who need to be accommodated within the education system, he said.

Gove said he expects the first refugees making use of the government’s new sponsorship route to come to the UK “in a week’s time”.

Speaking to Sky’s Sophy Ridge on Sunday, he said: “People can register their interest on Monday.

“Matching will be taking place from Friday. I would expect that in a week’s time we’ll see the first people coming here under the scheme.”

Asked for his estimate of the number of people it could bring to the UK, he said: “Tens of thousands.”

The Homes for Ukraine programme, to be rolled out this week, will allow individuals, charities, community groups, and businesses to bring people escaping the war to safety—even if they have no ties to the UK.

Britons offering accommodation to people fleeing Ukraine through the new route will receive a “thank you” payment of £350 ($456) per month.

Sponsored Ukrainians will be granted three years’ leave to remain in the UK, with entitlement to work and access public services.

Those offering homes will be vetted and Ukrainian applicants will undergo security checks. A website gathering expressions of interest is set to launch on Monday.

Gove said steps must be taken to ensure people who might be “intent on exploitation” are prevented from “abusing” the new scheme.

He told Sky News: “We absolutely do need to make sure, first of all, that the people in Ukraine are who they say they are, so there need to be some security checks there.

“There’s been understandable concern about the scheme being exploited possibly by criminal elements. So, that’s the first thing.

“Then the second thing is we do need to make sure that people here … are in a position to provide that support, which is why there will need to be security checks as well to make sure that those—and I think it would only ever be a tiny minority, but still—those who might be intent on exploitation can be prevented from abusing the system.”

The Levelling Up Secretary was also asked for an update on the number of visas that have been granted to Ukrainians so far, after the government came under fire for the speed and scale of its efforts to bring people fleeing the war to the UK.

He said “more than 3,000 visas” have now been issued, up from the 1,305 figure given by Home Office minister Baroness Williams of Trafford on Friday, correct as of Thursday morning.

Asked if he would take in a Ukrainian refugee through the sponsorship scheme, Gove said: “Yes.”

He told the BBC’s Sunday Morning programme: “I’m exploring what I can do, I know that there are others who have. Without going into my personal circumstances, there are a couple of things I need to sort out—but yes.”

Gove said there are potentially “hundreds of thousands of people” in the UK willing to take Ukrainians into their homes through the new route.

Meanwhile, Labour leader Sir Keir Starmer claimed the government’s handling of refugees fleeing Ukraine has been “an embarrassment for the United Kingdom”, as he said there should be no cap on the number of people the UK takes in.

He told Sky News: “The likelihood of an invasion of Ukraine was known weeks ago.

“The Home Office have been far too slow, far too mean in relation to this, and frankly the last few weeks have been an embarrassment for the United Kingdom in the way that it has dealt with refugees.”

Poland’s president told the BBC up to five million refugees could leave Ukraine in the worst-case scenario.

Gove also said he wants to “explore an option” of using sanctioned individuals’ properties to house Ukrainians fleeing the war.

Asked about reports in the Daily Mail that he wants to seize Russian oligarchs’ mansions and use them to accommodate refugees, he told the BBC: “I want to explore an option which would allow us to use the homes and properties of sanctioned individuals—as long as they are sanctioned—for humanitarian and other purposes.”

He added: “There’s quite a high legal bar to cross and we’re not talking about permanent confiscation.

“But we are saying: ‘you’re sanctioned, you’re supporting Putin, this home is here, you have no right to use or profit from it—and more than that, while you are not using or profiting from it, if we can use it in order to help others, let’s do that’.”

By Amy Gibbons and David Lynch