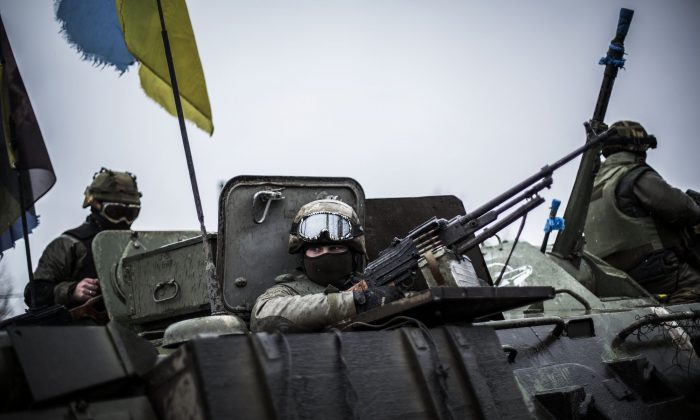 Ukrainian soldiers are seen in an armoured vehicle topped with a Ukrainian flag near the city of Artemivsk, in the Donetsk region, before heading to the city of Debaltseve about 45 km away, on Feb. 1, 2015. (Manu Brabo/AFP/Getty Images)
Europe

The Ukraine ceasefire agreement struck in Minsk will come as a relief to the increasingly desperate residents who live along the front lines in the Ukrainian Donbas. But even though the document was signed by Aleksandr Zakharchenko, prime minster of the Donetsk People’s Republic (DNR), the Russian-backed rebels in the east are taking a dim view of it.

Soon after the agreement was signed, the DNR authorities declared the ceasefire temporary, and promised that fighting would soon resume. They maintained the agreement simply prolonged the agony of the inevitable defeat of the decaying Ukrainian regime in Kyiv.

Later the same day, the sound of outgoing mortar bombs reverberated around the Kirovskyi district in Donetsk city as the rebels attacked government positions. There were also reports of incoming artillery shells in the city’s Leninskyi district close to the historic but now idle Donetsk Metallurgical Factory.

The agreement is set to apply from midnight on Feb. 14—and the stakes could scarcely be clearer.

The first test for what’s being termed “Minsk II” will be the struggle to peacefully resolve the situation in Debaltseve, a small town on a road and railway junction between Donetsk and Luhansk.

Debaltseve has been held by pro-Ukrainian forces since they swept south towards Donetsk in July 2014, only to be checked when regular Russian troops were sent in to prevent the rebels being militarily defeated.

The town has been surrounded on three sides by rebel forces ever since, and almost continuous shelling has resulted in a humanitarian crisis. Many residents were recently evacuated, most to Kyiv-controlled territory and some to areas behind the frontlines in the DNR.

For the last 10 days the pro-Russian rebels have been fighting fiercely to re-capture the town. The fighting has damaged the railway tracks, preventing the transportation of crucial commodity supplies to industrial facilities on both sides of the front.

The pro-Russian rebels now claim to have almost surrounded thousands of Ukrainian troops who hold the town. The incentive for the rebels to take the town is strong: it would make it much easier to resupply their armed forces in the west of the rebel-held territory, and would also likely facilitate an advance towards cities such as Artemivsk to the north.

The risk of heavy casualties amongst Ukrainian soldiers, who could become trapped behind enemy lines as they did in Illovaisk in August 2014, is a major concern for Kyiv.

Meanwhile, across the east, there is plenty of time for events that could seriously affect the implementation of the agreement. The question is whether either side will do as they are told—and so far, the omens are not good.

According to article two of the new Minsk agreement, Ukrainian troops are supposed to maintain their existing positions, while rebel forces are to fall back to the disputed “contact line” agreed in Minsk I on Sept. 19, 2014. This suggests that in some places the rebels are obliged to retreat from positions they have fought fiercely for, and with many causalities, even though they have the upper hand on the battlefield. That will make them all the more disinclined to comply.

A ceasefire and similar security zone was agreed in Minsk I in September 2014, but was not fully implemented, at least not by the rebel side. The Minsk I and Minsk II agreements reflect Russia’s desire to use the conflict in the Donbas to secure leverage over the new pro-Western authorities and Kyiv’s desire to maintain the fiction that Ukraine retains its territorial integrity.

The agreement does not reflect the desire on the part of the rebels to carve out a viable statelet in the Donbas, which they have named Novorossiya, recently launching a contest to select a national anthem for the nascent state.

Equally, the provisions of the accord do not reflect the wish of that part of the new Ukrainian elite that wants to fight to regain control over the Donbas. These people have been emboldened by the possibility that the United States might supply lethal military aid on top of the non-lethal supplies that have been delivered hitherto. While the agreement might suit the current interests of the Russian and Ukrainian governments, and possibly Germany and France, the pressure to continue fighting amongst the rebels and some in Kyiv is very strong.

The recent integration of the volunteer pro-Kyiv battalions into the Ukrainian army command and control system should mean they observe the ceasefire. And since they’ve been losing on the battlefield, they are more likely to welcome the ceasefire as a chance to regroup and resupply—but not to stand down permanently.

The Fog of War

The situation among the rebels is much more unclear. Russia is providing weapons, equipment, logistics and support as well as genuine and fake “volunteers”, but it is unclear to what extent the rebels are under direct Kremlin control. The presumably accidental shooting down of MH17 over the DNR last July showed just how easily unintended consequences can result when proxy forces get involved in conflict.

Equally, there have been credible reports that different rebel-battalions exact rough justice on alleged offenders by attacking each other. Many residents of Donetsk city genuinely believe that some attacks on the city are in fact inflicted by the rebels themselves to give the impression of incoming Ukrainian fire.

All in all, the Russian-backed rebels have been winning in this war of attrition; it’s hard to think of a reason why they would suddenly want to surrender their strong position against a weakened opposition.

While Minsk II could just about be the start of a credible comprehensive peace process, the reality on the ground means people on both sides of the front on both sides will have few expectations.