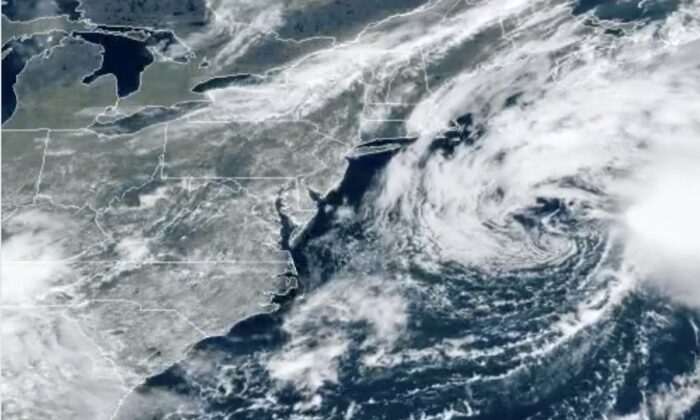 A satellite view of Tropical Storm Odette over the Atlantic Ocean on the morning of Sept. 18, 2021. (NOAA)
Florida

MIAMI—Forecasters announced the formation of a new tropical depression in the Atlantic Ocean on Saturday night, as the former tropical storm named Odette headed well offshore of Nova Scotia in Canada.

Tropical depression Sixteen was located 670 miles (1,080 kilometers) east of the Northern Leeward Islands, forecasters said. It was expected to pass north of the islands on Monday and Tuesday.

Top winds were around 35 mph (55 kph) and the system was moving west-northwest at 14 mph (22 kph). Forecasters expected it to become a tropical storm on Sunday, at which time it would be named Peter, the next name on the list.

Rainfall of 1 to 3 inches (3 to 8 centimeters) was possible for parts of the Northern Leeward Islands, including the Virgin Islands, and Puerto Rico through Tuesday.

Swells generated by the former tropical storm were affecting parts of the mid-Atlantic coast and will continue to cause dangerous conditions off the coasts of the Northeast United States and parts of Canada over the rest of the weekend, forecasters said.