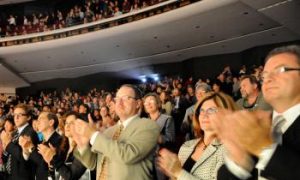 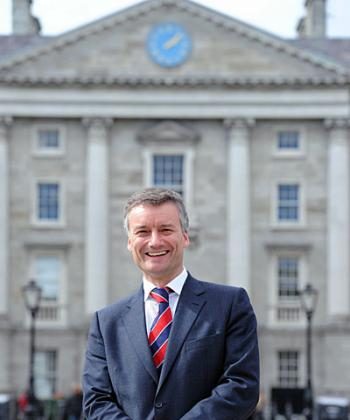 By Rita O'Connor
Print
DUBLIN—Professor of Bio-Engineering and Vice Provost at Trinity College Dublin, Professor Patrick Prendergast, has been elected Provost of Irelands most prestigious university.

He became Provost Elect this week after a vote involving Trinity College academic staff. The position of Provost has a term of ten years, during which the Provost is responsible for leading the college in achieving its core mission in education and research and in strengthening its position as Ireland’s leading university on the world stage.

Professor Prendergast said, “I am deeply honoured to have been elected Provost of Trinity College Dublin, the youngest Provost since Provost Andrews, who was elected in 1758.” From the outset of the campaign, Professor Prendergast said that he had asked the college electorate for his own mandate for a new and different kind of Provostship. “This has now been granted to me and I am determined to use my experience and proven ability to stand up for

Trinity is a world-famous university which attracts students from across the globe, and the university can play a huge role in the recovery of the Irish economy by producing graduates that will be confident and innovative at initiating new concepts and business ideas. The University also embraces all classes of Irish society, said Professor Prendergast. “I myself come from an ordinary background. One of the great strengths of the University is to change and evolve with the times, when you think originally it was a training ground for Protestant curates,” he said.

Professor Prendergast is the 44th provost to be elected since the college was founded in 1592. It was commissioned to be built by Queen Elizabeth 1st for the education of young protestant men. Women weren’t allowed to enrol until 1904.

At the time of its construction, it wasn’t known how to damp-proof the foundations of the buildings, which was a problem because of its close proximity to the river Liffey. To protect the books, the library had to be built on free-standing arches. Today, none of the original buildings remain. The oldest building dates from the early 1600s. Trinity grounds now encompass a mixture of architecture from the 17th, 18th 19th and 20th centuries.

Professor Prendergast is originally from Oulart, Co Wexford and is a Professor of Bio-Engineering at Trinity College. He first came to Trinity as an undergraduate student. He graduated with an engineering degree in 1987, and a PhD in 1991.
After post- doctoral positions in Italy and the Netherlands, he returned to a lecturing post at Trinity in 1995 and was elected a fellow in 1998. He is strongly committed to teaching and research. He established The Trinity Centre of Bioengineering in 2002, was elected MRIA in 2008 and ScD in 2009. He said: “The Provost I admire most is AJ McConnell who was a good friend of Eamon deVelara – they were both mathematicians. AJ McConnell was accredited with making Trinity more accessible and less of an elitist organisation.”

Professor Prendergast was appointed vice Provost in 2008 and will take up his new post as Provost on the 1st August when he takes over from the current Provost, Dr John Hegarty.