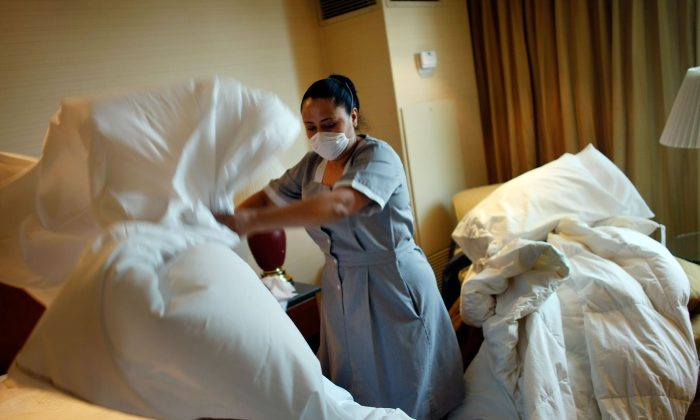 NEW YORK—A new do-it-yourself bed bug trap developed by research scientists at Rutgers University is cheaper and more effective than other traps available on the market. Much more research is needed to help contain a surge in bed bug populations, according to The Centers for Disease Control and Prevention (CDC).

The CDC issued a warning late May that the United States was experiencing an “alarming resurgence” in bed bugs, the pests virtually nonexistent in the 1940s but reappearing with a vengeance in the late 1990s. The agency is calling for more research to better understand the bugs.

A study published Aug. 6 in the Journal of Economic Entomology, identified a new and cheaper method of identifying bugs at the critical early stage of infestation. The “pitfall” trap focuses on the behavioral characteristics of bed bugs. It uses a simple collection of household materials to diagnose an infestation.

Like head lice, bed bugs are blood-sucking parasites, drawn to animal blood and warm, dark places. They hide in the seams of mattresses, crevices, cupboards, and among human clutter during the day, venturing out to feed at night. While they can travel at least 100 feet, they are usually within eight feet of where people sleep, sensing humans by the carbon dioxide emitted through breathing.

Rutgers researchers used upturned dog bowls covered in surgical tape dyed black, and added a mixture of chemicals to lure the bugs into the bowl, thereby cutting off their escape. The chemicals included spearmint and coriander oil.

According to the researchers, the pitfall trap costs around $2 and captured around three quarters of the bugs released. It is far more effective than a more expensive, shallower trap. Now available on the market, the shallower trap captured fewer than one in four of the bugs.

The researchers also combined yeast and sugar to create carbon dioxide, the mixture proving as effective as more expensive carbon dioxide cylinders in luring the bugs.

The monitoring process is important as bed bugs are usually found when bites surface as irritating red spots or welts. Those welts may take up to 14 days to surface by which time the bugs have well and truly moved in. They are extremely difficult to eradicate once they become entrenched.

The CDC has published an extensive list of procedures to eliminate bedbugs, which begins by assessing if bugs are present. A combination of pesticides plus cleaning, tidying and even burning if necessary, follows, but it may take months to eradicate them and re-infestation is common.

While they are not known to transmit disease, the bugs can cause a variety of physical and mental symptoms, including allergic reactions, secondary infections, stress and anxiety.

Although experts do not fully understand why the bugs have returned with such a vengeance, contributing factors are believed to include increased resistance to available pesticides, (DDT, the earlier pesticide of choice was banned), more people traveling, and a lack of awareness and programs in local communities.