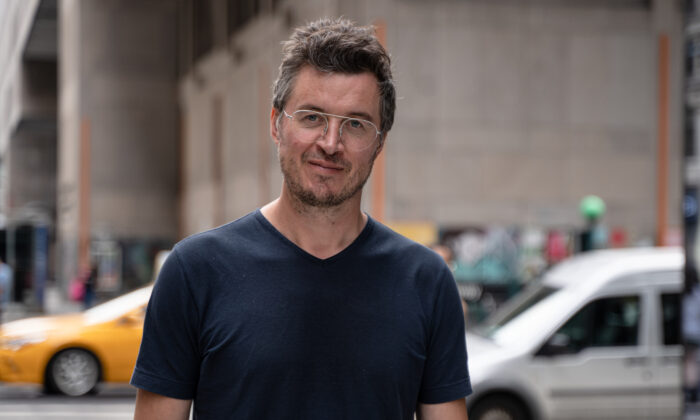 Mattias Desmet, a professor of clinical psychology at Ghent University and author of “The Psychology of Totalitarianism," in New York on Aug. 27, 2022. (Otabius Williams/The Epoch Times)
Social Issues

Professor of clinical psychology at Ghent University Mattias Desmet is the world’s leading expert in the phenomenon known as “mass formation,” which is a type of hypnotic state that occurs when people are isolated from one another and free-floating anxiety is prevalent, as in during the COVID-19 pandemic.

Desmet believes the world is now seeing a new form of totalitarianism, spawned in the last couple of decades and fostered by mass formation during the pandemic.

“What you’re dealing with now is not a communist or not fascist authoritarianism. It is the emergence, I think, of technocratic totalitarianism,” Desmet said during a recent interview for EpochTV’s “American Thought Leaders” program. This new form of control will not be “led by gang leaders such as Stalin or Hitler, but by dull bureaucrats and technocrats,” added Desmet, citing the work of 20th century political philosopher Hannah Arendt.

This type of totalitarian technocracy believes the answer to the anxiety in society is more control. A “technocracy is a system led by technical experts and not by democratically elected politicians,” said Desmet.

The Origins of Technocracy

“What we see now during the last decades is the emergence of a technocratic ideology, the belief that the problems of society, the belief that the objects of fear and anxiety in a society—such as terrorism, or climate change, or the Coronavirus—that they should be controlled, or that we should fight these objects of anxiety by controlling them in a technological way,” he said.

As in the case of the pandemic, those in power thought it best that those with technical knowledge about viruses should decide policies, not democratically elected politicians, said Desmet.

“I believe that the technocratic system is the ultimate consequence of this rationalist ideology that emerged since the beginning of the tradition of enlightenment,” he added.

There are limits to this rationalist view of understanding life, and Desmet believes people must focus on ethical principles or the principles of humanity to create a harmonious and free society.

This type of state control is “a desperate attempt to erase uncertainty from human existence, and to impose one state certainty, one shared certainty to every individual life,” said Desmet.

“This mass formation usually starts with a narrative that is being distributed through the mass media, indicating an object of anxiety, and at the same time providing a strategy to deal with the object of anxiety. What happens then, all this free-floating anxiety in the population suddenly connects to this object of anxiety provided in a narrative,” said Desmet.

And people are willing to go along with the irrational, faulty strategy, proposed by the authorities, he added.

When the general public doesn’t know why it feels anxious, frustrated, and aggressive, that is the perfect environment for mass formation, said Desmet.

People do not connect to each other but to the “collective ideal,” Desmet said. “All the psychological energy, all the love, you could say, between individuals is extracted from the individual social bonds and injected in the bonds between the individuals and the collective.”

At the end stage of mass formation, people are in a paranoid state where they “snitch” on their neighbors and colleagues for not following the rules and blindly go along with irrational policies, as in the case of the COVID lockdowns, he said.

These policies are reinforced by mass media and people go along with them “because it gives them a sense of control, they have the feeling that they know now what they were anxious for, and that they can control their anxiety by participating in the strategy to deal with the object of anxiety. For instance, lockdown to deal with the virus,” said Desmet.

“In a mass formation, people seem to choose to deal with uncertainty by just accepting everything the group believes in, they believe altogether, and the same dogmatic ideas and the same narratives that shouldn’t be questioned anymore,” said Desmet.

The isolation and dependency on technology can reinfuse people with the propaganda, causing the hypnosis to last a long time, said Desmet.

“With the emergence of the mass media, that mass formation can last for a long time because people can be constantly, time and time again, be reinfused by this same propaganda, the same narratives,” said Desmet.

Like all totalitarian control, technocracy does not tolerate dissent, he said.

“It is as if all the uncertainty disappears under a collective narrative, that should not be questioned anymore, and that leads to this famous intolerance for dissident voices,” said Desmet. “To what extent this totalitarianism will succeed in destroying everyone who doesn’t want to go along with it, that will depend on what those people do, who are not in the grip” of this mass formation.

Unhypnotized People Must Speak Up

Those who were not “hypnotized by the narrative” could see that many of the COVID-19 measures were “fundamentally and intrinsically irrational,” said Desmet.

The people who criticized these irrational policies and mandates and dissented were censored and in some cases punished, which is a hallmark of totalitarianism. In addition, totalitarianism requires “that society should be led on the basis of indoctrination, propaganda,” instead of “truth speech,” which is something a person genuinely believes and tries to share with others, said Desmet.

“From the First World War onwards, we’ve seen the emergence of an impressive propaganda machinery in the Western world through which a population was constantly manipulated without them knowing it,” said Desmet.

The remedy for this mass formation and to prevent atrocities from occurring is to speak out, he said.

“If you want to disturb the mass formation, then you have to speak out,” said Desmet. “The ancient Greeks called this parrhesia, like a kind of bold, courageous speech, practiced by individuals who refuse to go along with the narratives of a group or dominant narrative.”

Desmet urges all people to find the courage to speak out against irrational, totalitarian policies, not to convince anyone but to exercise their “inalienable rights.”