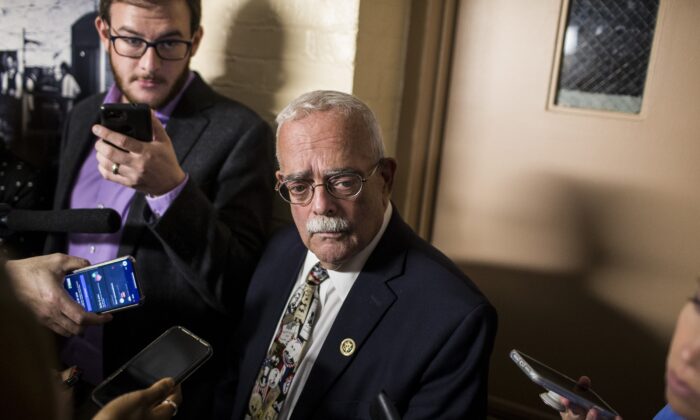 Regardless of which party controls the House of Representatives beginning in January, the top Democrat on the powerful House Oversight and Reform Committee may well come from a district whose voters are mostly federal workers and contractors.

If as expected, Republicans flip the House and regain control, the current ranking minority member, Rep. James Comer (R-Ky.), is most likely to be the new chairman. Comer has been laying the groundwork for aggressive oversight of President Joe Biden and his administration in 2023.

Rep. Gerry Connolly, the Democrat who represents Fairfax County, Virginia, was the first to announce his intentions, issuing a statement of interest within 24 hours of Maloney’s loss.

Because of his district’s employment demographics, Connolly, a former chairman of the Fairfax County Board of Supervisors, the Democrat has made the oversight panel his top committee assignment throughout his seven terms in Congress.

Most proposed legislation affecting federal personnel policies is referred to the oversight panel.

“For more than 14 years, I have made this committee my top priority and focused on the issues that define it: Postal reform; defending our proud federal employees; rooting out waste, fraud, and abuse; modernizing the federal government; and holding the Trump administration accountable,” Connolly said in a statement.

Connolly’s biggest campaign contributor group in his current reelection effort is retirees, many of whom are former federal workers, while his second biggest is federal employee unions, according to Opensecrets.org.

Rep. Jamie Raskin, whose suburban Maryland district is, like Connolly’s, dominated by federal workers and contractors, issued a Dear Colleague letter announcing his candidacy and promising a chairmanship that would be a continuation of his radical left-wing outlook.

Raskin was the House manager in 2021 for the Democrats’ second failed impeachment effort against then-President Donald Trump.

“Since his second impeachment … we have documented Donald Trump’s astounding crimes against democracy, but he has only tightened his authoritarian stranglehold over the GOP.

“The brazen forces of autocracy, kleptocracy, and theocracy are rampaging across America,” Raskin told colleagues, according to Axios.

Further noting that he has served as chairman of the panel’s subcommittee on Civil Rights and Civil Liberties, Raskin said he is proudest of “a set of five hearings we did over the last four years on the subject of violent white supremacy in America and the serious threat it poses to civil rights and liberties, public safety, and democracy itself.

“Long before Jan. 6, 2021, we examined and reported on the rise of militia extremism, the infiltration of local police departments by white supremacists, and the rampant growth of domestic violent extremism during the Trump administration.

“With the Homeland Security Committee, we did everything we could to blow the whistle on the extremist subterranean political culture that was activated by Donald Trump on that fateful day.”

Raskin’s top contributor category in his 2022 re-election campaign to date is retirees, according to Opensecrets.org, who have contributed more than $447,000. The vast majority of those are former federal workers.

The third candidate, Rep. Stephen Lynch (D-Mass.) circulated a Dear Colleague letter in which he also took a partisan shot at Republicans on the oversight panel in an accompanying statement.

“In the midst of the recent attacks on our democracy and against the Congress itself, the role of the Oversight Committee is more important than ever.

“I believe I am well prepared to serve at this pivotal moment in our history when it is clear that some Republican members have actively chosen to disregard the truth and their sworn oaths of office in favor of political gamesmanship, divisive rhetoric, and disinformation regarding the 2020 election, the Jan. 6 insurrection, misconduct by former president Trump, and other issues of critical concern to the American people,” Lynch said.

In his letter, he emphasized that he is “the most senior Democrat running to lead the committee” and that he has opposed Republican efforts in Congress to “abrogate the fundamental employment rights of federal employees” and proposal to privatize government programs.

Lynch’s district includes much of Boston, which, though not as heavily as the Washington suburbs, is a regional headquarters city for many federal departments and agencies, and thus is home to significant numbers of federal workers. Public sector unions are Lynch’s second-largest campaign contributors group.

Republicans interviewed by The Epoch Times aren’t excited about what they view as a conflict of interest in an oversight panel chairman or ranking member whose constituents are mostly federal workers and retirees who depend upon government paychecks.

“Considering that conflict of interest, they would have to take the word ‘reform’ out of the committee title,” former U.S. Office of Personnel Management (OPM) Director Donald Devine told The Epoch Times. The federal workforce is administered by OPM.

Veteran congressional oversight aide Mike Howell pointed out that Democrats have previously removed another word from the panel’s official title.

“There is a reason why Democrats dropped the ‘Government’ from ‘Oversight and Government Reform’ when they took over the committee in 2018—they just aren’t there to fulfill their constitutional duty to provide a check on government,” Howell told The Epoch Times.

“They, and other representatives in similar situations, are the embodiment of Swamp conflicts-of-interest and are a key reason why people have such little trust in Congress,” Howell added.

Brian Darling, another congressional staff veteran and former general counsel for Sen. Rand Paul (R-Ky.), agreed, telling The Epoch Times that the panel “will be much more sympathetic to federal bureaucrats if either Rep. Jamie Raskin or Rep. Gerry Connolly become the party leader on the committee next year.”

“Expect a dogged defense of the Washington status quo. Given documented abuses at the IRS, the Department of Justice, and the widely acknowledged failures at the Center for Disease Control and Prevention (CDC) in responding to the pandemic, the next presidential administration must be prepared to enact and implement a strong civil service reform agenda.

“More than anything else, Americans need and deserve transparency in government operations and accountability from the career civil service, especially at the top.”