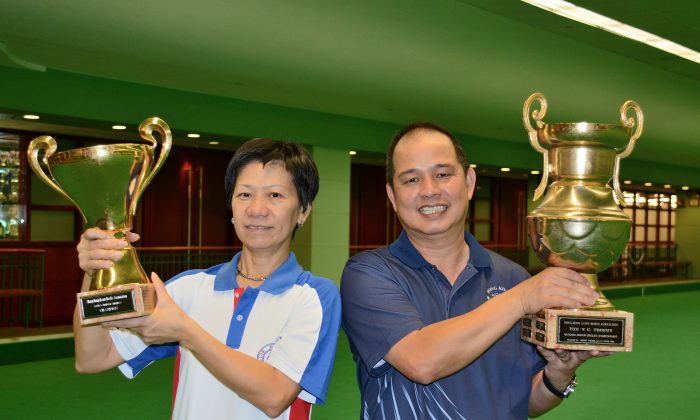 “As Tam and I are both HKFC members, we are pretty familiar with the green so it really depends on who performed better,” said Chan, “but I am particularly happy as we were drawn to play on Rink 1 which I am extremely familiar with.”

The results of 10:2 and 10:4 in straight set may suggest that Chan is correct, but it does not reflect the whole story: “Tam played really well and in a lot of situations I needed to put in extra effort to get the head turned.”

In one particular end midway through the second set when Tam was holding two shots, each were just an inch away from the jack. Chan stayed focus and made a precious draw, getting into the head between the two bowls and touching the jack to win this end. With this the leading edge was opened up and Tam never recovered.

“The home green advantage boosted my confidence and all I needed to do was to play to my normal standard. Everything is right for me today so I am really happy that I finally moved a step forward from the runners up [position] back in 2008,” said a delighted Chan.

Ladies
For the ladies competition, Celena Kwok added another title to her collection in the same week by defeating Hong Kong International Irene Chow in the final. She came from behind to defeat Hong Kong Youth Team to win the National Fours last Sunday.

Kwok, who represented Club de Recreio, needed another come-from-behind performance to win the title again. In the last end of the first set when Kwok was chasing the game 5:7, she maintained her composure and drew three close shots to take the set.

“It is really critical for me to take the set and my last bowl also helped me to recover from the drawback earlier in the game,” said Kwok.

In the second set it was a pretty one sided scenario and Kwok took it 10:4 with little resistance from Chow: “Irene played really well and is very steady. It is not easy for her especially when she has a stomach problem today.”

“My performance today owes a lot to my recent trials during the Hong Kong team selection process. I have spent quite a lot of time and efforts on the drills. During the game I just recalled my lessons and experience in the drill practice and I am glad that it works out fine,” Kwok explained.

Novice Singles
Meanwhile, Jason Choi of the Hong Kong Youth Team also won his second title within a week. He defeated teammate Michael Cheung 21:12 in the final of the Novice Singles to clinch the title.

Choi skipped his youth team to win the National Fours on the first Finals Day of the year on Jul 6.