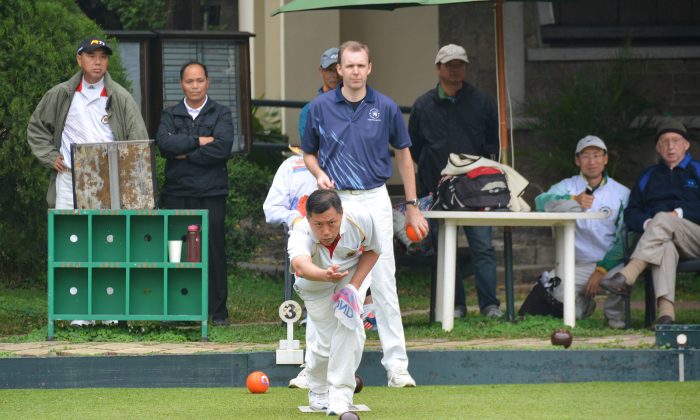 Mobin Yau (delivering) of the Hong Kong Cricket Club on his way to defeating Derek Wyllie from the Hong Kong Football Club in the final of the National Champion of Champions Singles at United Services Recreation Club last Sunday, March 8, 2015. (Stephanie Worth)
HK Lawn Bowls

Wyllie started well in the final, won a shot in the first end of the first set. But little did he know that this was the only result he was going to get in this set. Yau took overall control throughout and won the set convincingly at 10:1.

In the second set, Yau lost his concentration a bit and quickly fell behind with a score of 6:1 after just four ends. “Maybe I won the first set too easily so I did not focus well at the beginning of the second set,” said Yau, “With five ends remain I know I just need to win a shot every end to tie the game, which also means that I will win the match.”

Yau re-focused and everything happened accordingly to plan. He took five shots from the next four ends to draw level with Wyllie on the eighth end. But he still needed to win the last end to win the game.

“I drew the shot with my third shot, but my last bowl was a bit short and rested a metre in front of the jack. Wyllie tried to cut my shot bowl out, but unfortunately his shot hit my bowl in front and I got the shot I needed.”

Yau attribute his success to calmness in the final: “To enter the final has been a bonus for me so I just enjoyed every moment of it. That helped me to perform without any pressure.”

Ladies
For the ladies competition, veteran bowler Angela Chau added the National Champion of Champions Singles title to her rich collection of trophies. This is also her second Singles title in three months, following her National Knock-out Singles success back in January.

She played against Cheng Mai Yung of Island Lawn Bowls Club in the final.

Both sides played well in the first set and tied at 7:7.

In the second set, the game was again tied at 6:6 with just one end to go. Chau displayed a high level of calmness and technique to draw a close shot with her third bowl. Cheng tried to take the shot out with her last two bowls, but in vain and Chau took her first CoC title.

Chau believes her victory at the Knock-out Singles in January was the key factor for her success: “The Knock-out Singles title boosted my confidence and my good form just carried on from then. I am happy to win this for the first time and hopefully there will be more to come.”