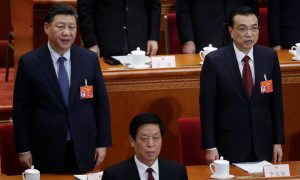 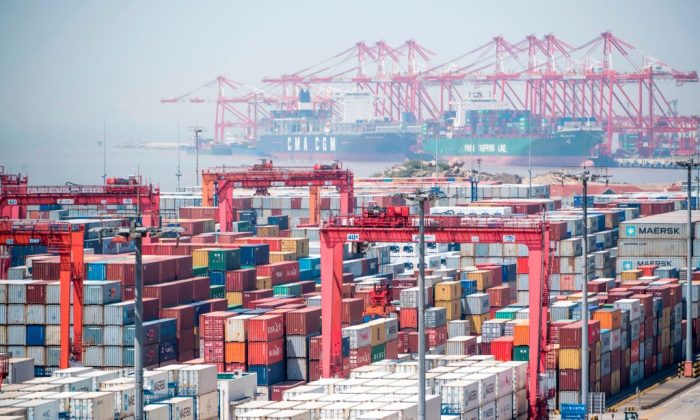 WASHINGTON—Confidence about the U.S. economy has emboldened President Donald Trump to take a tougher stance on China, raising tariffs on May 10 to span $200 billion worth of Chinese imports. Trump in a May 13 series of tweets warned, “China will be hurt very badly if you don’t make a deal.”

Tensions escalated between the United States and China the week of May 6 as Beijing backtracked on delivering key structural reforms and Trump raised tariffs on Chinese imports. A two-day meeting on May 9 and 10 between the U.S. and Chinese delegates in Washington yielded no trade agreement amid the rising dispute.

The Chinese Finance Ministry announced on May 13 that Beijing would raise tariffs on $60 billion in U.S. goods in retaliation for Trump’s decision to raise duties on $200 billion in Chinese products to 25 percent from 10 percent.

In a series of tweets, Trump accused China of backing out from “a great” and “almost completed” deal.

“I say openly to President Xi & all of my many friends in China that China will be hurt very badly if you don’t make a deal because companies will be forced to leave China for other countries,” he wrote.

In a separate tweet on May 11, Trump said China had tried delaying tactics “to see if they could get lucky & have a Democrat win” in the 2020 U.S. presidential election.

“The only problem is that they know I am going to win,” Trump wrote, citing the strong economy and jobs numbers.

According to analysts, Trump is emboldened by the strength of the U.S. economy and the stock market, as well as his enhanced reelection odds. He also is confident the U.S. economy can endure all retaliatory measures from China.

Despite renewed tensions, Trump said the negotiations with Beijing would continue. However, he warned the new tariffs “may or may not be removed depending on what happens with respect to future negotiations!”

Trump also told reporters that Washington was preparing to impose 25 percent tariffs on the remaining $325 billion in Chinese goods, which would cover 60 percent of consumer goods imports from China, according to Citi.

Trump uses the threat of tariffs as part of a negotiation tactic to crank up the pressure on China, according to analysts. And in a full-blown trade war, China has more to lose economically, they say.

The United States began imposing tariffs on Chinese imports in July 2018. Together with the previous two rounds of tariffs, the 25 percent levy on a total of $250 billion worth of Chinese goods “is estimated to reduce China’s exports by 5.6 percent, GDP growth by 1 percentage point, and employment by 4.4 million,” according to Citi.

In addition, businesses in China caught in the crossfire are planning to relocate their operations to avoid tariffs. A prolonged U.S.–China trade war will force more companies to shift their supply chain activities out of China, according to experts.

U.S. consumers also will suffer to some extent from the trade dispute, according to analysts.

“The effect from tariffs on Chinese imports has been modest so far as tariffs focused on a smaller share of consumer goods and on goods that are easy to substitute,” Citi analysts wrote in a report.

Trump is aware of the burden on farmers who are a critical voter group in the 2020 race. Soybean farming states such as Iowa have been among those most heavily hit by the tariff war.

U.S. stocks also tumbled after China announced retaliation on May 13. Both the S&P 500 and the Dow Jones Industrial Average fell nearly 2.5 percent in early trading. Escalating tensions since May 6 sent both indices down more than 4 percent.

A hardened stance toward Beijing, however, draws strong bipartisan support in Washington, which gives Trump leeway in the trade fight despite stock market turbulence.

Senate Minority Leader Chuck Schumer (D-N.Y.), one of the most prominent critics of the administration in the Senate, urged Trump to “hang tough on China.”

“Strength is the only way to win with China,” he wrote on Twitter on May 5.

Investors believe the United States and China ultimately will reach a deal. However, the markets’ reaction is a sign that they are still concerned with the ramifications of a potential trade war.

Prior to last week’s events, the U.S. stock market had priced in a resolution of the trade dispute between Washington and Beijing, said Robert Johnson, chairman and CEO of Economic Index Associates and finance professor at Creighton University.

“With tariffs actually being put in place on Friday, we will likely see a very strong negative reaction in the U.S. equity markets if progress is not made on the trade dispute in the coming weeks,” he said.

According to David Dietze, president and chief investment strategist of Point View Wealth Management, the trade war is “more important to China than the United States.”

“The issues and remedies are so complicated, don’t expect this news story to get resolved any time soon,” he said, adding that he was still bullish for the longer term.

“The trade talks were just one part of the bullish story. Earnings this year will be greater than last year. Interest rates are far lower than last year and seem tethered,” he said. “The American economy is much bigger than trade with China.”