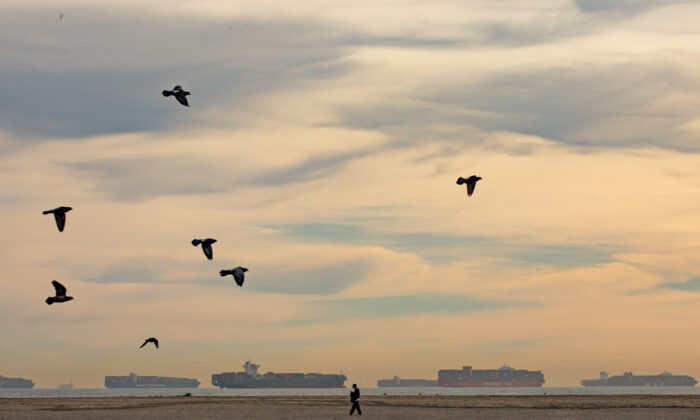 Ships line the horizon seen from Seal Beach, Calif., as they wait to come ashore to the Port of Los Angeles, on Jan. 12, 2021. (John Fredricks/The Epoch Times)
Southern California

A new queuing system designed for the Los Angeles and Long Beach ports has reduced the number of cargo ships idling near the California coast, marine officials reported Nov. 22.

The program is designed to reduce the number of ships “loitering,” or using their own diesel engines to idle unanchored, off the coast or anchored near the ports, Kip Louttit, head of the Marine Exchange of Southern California told The Epoch Times.

“The program is going to continue until the backup is cleared,” Louttit said. “We’ve come down 10 to 20 ships in a week, and we hope ships continue to comply.”

The new volunteer system assigns arriving ships a time and date at the dock based on when they left their last port and the expected arrival time.

Before last week, ships head directly to the port to receive a docking time once they were within 25 nautical miles off the southern California ports.

Ships participating in the program are now spread across the Pacific Ocean, Louttit said.

The drop in the number of ships anchored or floating near the twin ports may not equate to an improved supply chain, Louttit said.

“All we’re doing is spreading them out,” Louttit said. “It does nothing to speed the supply chain moving ashore.”

The new system allows cargo ships to decide whether they want to travel directly to the port area or linger further out in the ocean.

Some ships may decide to anchor in Asia for a few weeks instead or linger off the coast of Mexico, for instance.

“How the ships spread themselves out is up to them,” Louttit said.

Ships are not headed to other ports as a result of the new system, he said.

The ports, which handle about 40 percent of the nation’s shipping, have recorded a 22 percent increase in cargo volume since 2022.

Officials in the Los Angeles area have blamed a recent increase in area air pollution on the buildup of container ship traffic.

The South Coast Air Quality Management District (AQMD) reported increased emissions, which are reaching the inland communities, according to KTLA.

“With significant increases in goods movement, including more than 100 ships parked off our shores that aren’t even at a berth, we are seeing more than a 40 [percent] increase in port emissions compared to normal operations. This has real impacts on air quality and associated health effects both for our near-port and our inland communities,” the AQMD said in a statement.

A study released last week by Nanyang Technological University in Singapore found that emissions increased by 100 percent in Los Angeles and almost two-thirds in Long Beach during the pandemic period from July 2020 to July 2021.

Container ships were responsible for one the largest increases at 94 percent, according to the study.

The Coalition for Clean Air, based in Los Angeles, is pushing the ports to reduce the “massive amounts of pollution they’re inflicting on California,” Policy Director Bill Magavern told The Epoch Times.

A study released last week by the California Air Resources Board showed the increase in cargo ship traffic during the height of the pandemic last year pumped about 20 tons of additional nitrogen oxides, the key ingredient of smog and soot, into the Los Angeles region, Magavern said.

“That’s an absolutely massive amount,” Magavern said. “There’s no way the Los Angeles region can have healthy air if that continues.”

The coalition is pushing the ports to institute a program at the ports that would limit the emissions in the same way the state limits warehouse emissions, he said.

Authorities at the Port of Los Angeles expect a slowdown of goods arriving after Thanksgiving.

The port anticipates a slight increase in goods before Lunar New Year, Feb. 1, when factories ramp up production in China and other Asian countries before shutting down for the holiday.

“It’s too early to give an estimate of how big an increase,” Port of LA spokesman Phillip Sanfield told The Epoch Times.

Port CEO Gene Seroka told CNBC’s “Squawk on the Street” last week that the port is making efforts to get containers off the docks and holiday goods to stores.

“There’s cargo sitting here that is not needed right now,” Seroka said. “We needed to get that cargo out of the way and start speeding the product that needed to make it there for the holidays, as well as the parts and components for American factories.”

Since the fee was announced Oct. 25, the ports have reported a decrease of 33 percent in containers left on the terminals.

The improvement has prompted port officials In LA and Long Beach to again delay the fee. The new fines will not begin until Nov. 29, the ports announced Nov. 22.