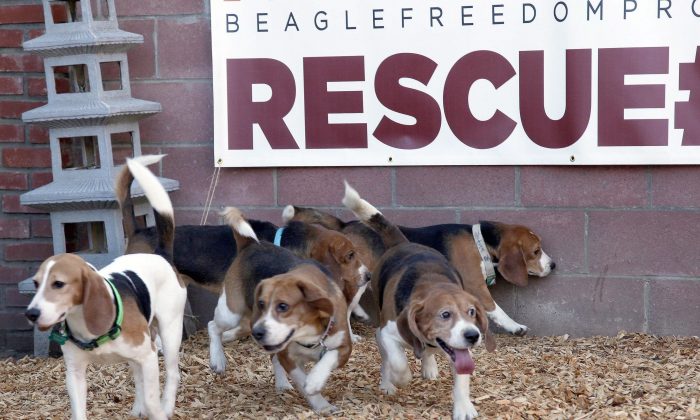 Beagles that were released after years of being used for drug testing play at the Beagle Freedom Project facility in Los Angeles on Feb. 27, 2013. A new technique developed by researchers at the University of Guelph can reduce the use of animlas in drug testing also eliminate some of the ethical issues related to animal testing. (AP Photo/Nick Ut)
Canada

New ‘Synthetic Skin’ Can Reduce Use of Animals in Drug Testing

A new “synthetic skin” developed by researchers at the University of Guelph could radically change how drug testing is conducted by pharmaceutical companies and universities.

The new method could greatly reduce testing in both animals and humans for drugs such as wound treatment medications. It could also cut costs and provide results more easily and quickly, the researchers say.

“You would still need animal testing to be conducted, but the amount of the animal testing can be reduced drastically,” said Suresh Neethirajan, an engineer at the University of Guelph and one of the researchers involved in creating the new testing technique.

The “wound model” created by Neethirajan and his team took two years to develop and consists of an artificial skin-like substance made up of amino acids and proteins that can function similarly to the skin of an animal or human.

“We have come up with a model, which mimics all of the conditions—the biomechanical, the physical, chemical, and biochemical—of local skin tissue,” said Neethirajan.

“It is built on glass slides. The whole device we have built is probably 5 cm by 3 cm (about 2 inches by 1 inch) and rectangular in shape, and it can be placed under a microscope to visualize.”

The method was designed to mimic testing in guinea pigs, mice, rabbits, and sheep, and allows researchers to watch interactions between bacteria and the drugs being tested.

Currently, drug companies testing wound treatment medications have to wound the animals, collect swabs, and monitor healing, all of which takes time and adds to the expense.

We have come up with a model, which mimics all of the conditions of local skin tissue.
— Suresh Neethirajan, professor University of Guelph

Neethirajan said the model he and his team developed can not only reduce expenses for drug companies but also eliminate some of the ethical issues related to animal testing.

Animal testing in Canada adheres to the ethical guidelines set out by the Canadian Council on Animal Care (CCAC), a nonprofit that provides researchers with set criteria for animal testing and is based on international standards of ethical treatment.

Among the CCAC guidelines is a requirement for researchers to replace the use of animals in drug testing whenever possible and the new research addresses this concern, said Melike Schalomon, associate dean of administration and professor of psychology at MacEwan University in Alberta.

“A replacement would be exactly the type of thing that is addressed by this research,” she said. “This kind of replacement alternative makes sense in terms of money, but also fulfills this requirement by the CCAC to find a replacement when possible.”

The new testing technique is timely given the expense involved in animal research, Schalomon adds.

“Animal research is some of the most expensive research. I have been an animal researcher for 25–30 years. It is very expensive and the guidelines are that the animals can’t be cared for by the researchers. You have to have veterinarians that are on retainer or on staff to look after the animals,” she said.

Neethirajan and his team hope their technique will be mass-produced for use by scientists worldwide.