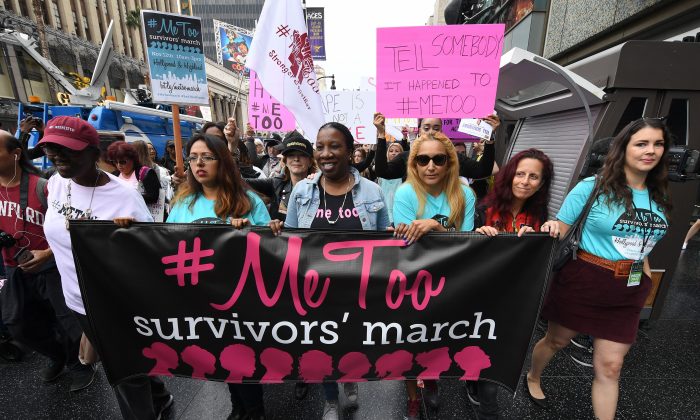 Women who are survivors of sexual harassment, sexual assault, sexual abuse and their supporters protest during a #MeToo march in Hollywood, Calif. on Nov. 12, 2017. (Mark Ralston/AFP/Getty Images)
Viewpoints

A new workplace study, soon to be published in the journal Organizational Dynamics, finds that following the #MeToo movement, relationships between men and women have shifted considerably.

The study essentially concluded that men are reluctant to interact with their female colleagues at work for fear of retribution, even if undeserved. This was predictable, yet some are finding the results difficult to interpret.

The study found that nearly one-third of the men surveyed avoided one-on-one meetings with female co-workers. Twenty-one percent said they would be hesitant to hire a woman for a job that might require regular, close interaction, such as business travel, and nearly the same percentage would be reluctant to hire an attractive woman. Men are avoiding women more in 2019 than they were even a year ago.

Instead of wondering why #MeToo might have had this effect, or perhaps considering the fact that the movement itself went too far in vilifying men, one columnist at The Guardian, Arwa Mahdawi, simply blames absolutely everyone else. She observed that “Mike Pence is quite the trendsetter” and perhaps men are simply “angry that #MeToo ever happened.”

“There’s been a lot of talk about ‘grey areas’ in #MeToo. All this harassment business is very difficult for men, we’re told, because nobody even knows what sexual harassment is any more! Men are afraid to even shake a woman’s hand in case she thinks it’s harassment! Easier to just avoid contact altogether! What’s really interesting about this study, however, is that it thoroughly debunks the argument that men are confused about what constitutes unacceptable behavior. The very first thing researchers did was look at 19 behaviours (emailing sexual jokes to a subordinate, for example) and get people to classify it as harassment or not. Surprise, surprise, both genders basically agreed on what harassment entails.”

In a way, Mahdawi is right. I don’t think men, in general, are or were ever confused about what constitutes sexual harassment. Sure, some men like Harvey Weinstein are abusive and use their power in a sexist industry to abuse women emotionally, physically, and sexually. Weinstein didn’t appear to acknowledge this abuse, but his behavior has now been exposed. I think the majority of men in the workplace realize this is wrong.

The #MeToo movement did expose sneaky, hidden perpetrators such as Weinstein. It heralded women, like Gretchen Carlson, who were brave enough to sue abusive men like Roger Ailes—and win. Yet with those courageous, honorable shots fired came some uncomfortable kickback, if you will. That residue has spread, somewhat uncontrollably, into parts of the workplace and relationships between men and women, and the survey demonstrates this.

Are men just simply unaware of what sexual assault is? Doubtful. Women might be, though. From false rape charges tried in university kangaroo courts to a weird date with a celebrity, women seem to struggle to define what is uncomfortable or a poor choice versus what is assault or rape.

What was once an awkward date, drunken sex, or a bumbling compliment has now all been rolled into the same heinous act and the perpetrators all weighted with the terrible accusations. I wrote back in a 2017 column that it “creates a dynamic where all women are basically victims and all men are near-perpetrators,” and two years later, this study shows it has.

Men have battened down the hatches at work not because they’re stupid, beta, or just like Pence, but because they saw in the flash of a news cycle how a request for drinks after work could be turned into a hit piece, or how a compliment could lead to into a complaint to Human Resources of sexual harassment.

The #MeToo movement has brought a lot of disgusting, vile men to justice and likely encouraged a lot of women to stand up for themselves, but it has rolled a scale of activities—from awkward dates to violent rape—into one thing. Men and women, at work and at home, will need to parse out those differences over time.