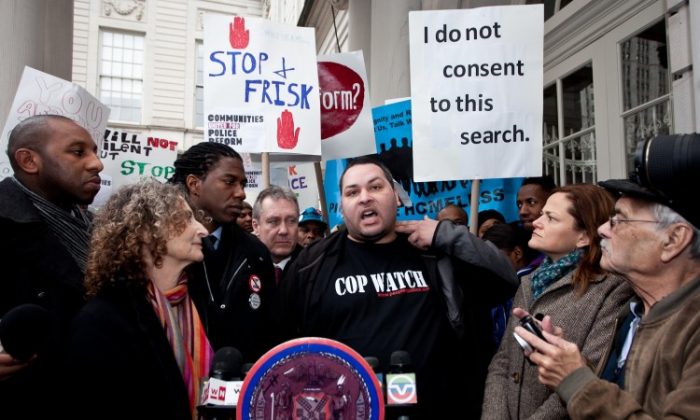 Steve Kohut of Communities United for Police Reform gestures as he recalls being subjected to a stop-and-frisk. (Amal Chen/The Epoch Times)
US

The first bill will create a ban that prohibits police practices that are bias-based and discriminatory, which protects communities from profiling based on race or immigration status.

The second bill, much like the Miranda Warning, will require NYPD officers to explain to a person their right to refuse consent to a search without a warrant or probable cause and to obtain proof of consent.

The third bill will require that police officers provide their name and rank, specific reason for law enforcement activity, a business card, and the number of the Civilian Complaint Review to the subject being searched.

City officials and community leaders joined for a press conference on the steps of City Hall in support of the legislation. People crowded around the podium holding signs that showed “I do not consent to this search,” “Got reform?” and “Stop police violence.”

At the conference, Steve Kohut of Communities United for Police Reform recalled one afternoon when he was walking in the city when a van drove up with three police officers who pointed their guns at him. Kohut was held with one gun against his neck, one against his right temple, and one against his chest. The officers proceeded to search him and removed his clothes.

“They told me if I moved I’d be shot,” said Kohut. “I was standing there in broad daylight, standing in the snow wearing nothing but my underwear and my socks.”

Kohut was found to be innocent after the search. “Never was I arrested at any of these occasions; all they ever said to me was ‘It’s your lucky day’ and walked away,” he said.

“Recent statistics show that almost 90 percent of New Yorkers stopped and frisked are innocent,” said Councilman Williams. “We need to empower the 90 percent that are innocent with legal protections, stronger oversight, and better policing practices.”

The NYPD issued a statement on stop-and-frisk, which showed a fall in murder rates from 11,05

cases, a decade before Mayor Michael Bloomberg took office, to 5,430 cases in the past year. A total of 8,263 weapons were recovered as of a result of stops in 2011. Eighty-seven percent of the stopped subjects were black and Hispanic people.

“When the mayor and the [police] commissioner say that crime is going down, it is not because of stop and frisk,” said Councilwoman Rosie Mendez. “You want to throw out numbers, let’s deal with the real number that exists. Let’s compare apples and apples not apples and oranges.”

According to statistics by Heather MacDonald, John M. Olin fellow at the Manhattan Institute and a contributing editor of City Journal, a national urban-policy magazine, black males are 10 percent more likely to be the victims of a crime than white males, and although crime has decreased in general all over the country, cities that employ rigorous proactive policing have seen a far greater decline in criminal activity.

“We could reduce crime if the police could just barge into your house whenever they wanted, but the bill of rights doesn’t allow that,” said Paul Butler, associate dean for faculty development at the George Washington School of Law, who himself has been a subjected to a stop-and-frisk.