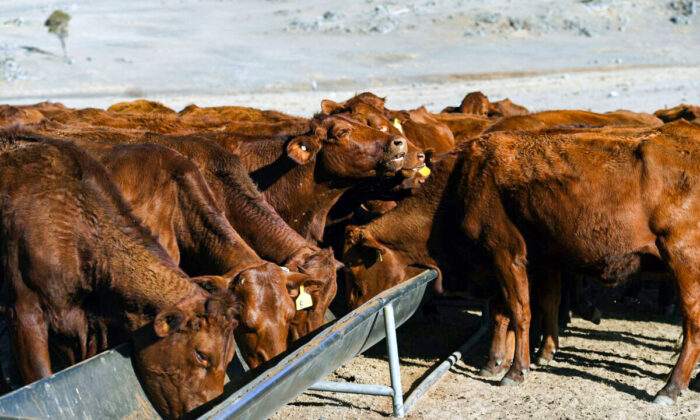 Cattle feeding from a trough on a drought-affected farm near Armidale in regional New South Wales on Aug. 26, 2019. (WILLIAM WEST/AFP/Getty Images)
Australia

New Species of Dung Beetle to Roll Into Australia

A new dung beetle has been introduced into Australia as part of the Dung Beetle Ecosystem Engineer (DBEE) project to control cattle dung for grazing areas in South Australia (SA).

The Gymnopleurus sturmi dung beetle, native to Morrocco, lives in a habitat and climate similar to that of SA’s during its late winter to spring season and was chosen to fill in the gap where most dung beetles are inactive.

“Dung beetles are ‘specialists in their field,’” said the lead researcher Dr Valerie Caron. “No single species active in all regions across all seasons.”

The beetles also work in two different ways, with some species disposing of cow dung via tunnel building, while others use the more well-known method of rolling. Tunnel beetles will create tunnels in the soil to bury the dung whilst rollers roll it into a ball before burying it.

The tunnels in the ground also put air into the soil and allow rainwater to seep in, promoting a healthy environment for microbes and earthworms.

G. sturmi is the third and final beetle introduced as part of the most recent stage of the project, and contrary to the first two— Onthophagus vacca and Onthophagus andalusicus—it is a roller.

As tunnellers focus on the middle of cowpats whilst rollers take dung from the sides, “working together, both types of beetles disperse dung more quickly, deterring flies from laying eggs,”  Caron said.

To work with Australia’s changing climates and ecosystems, 23 new species of dung beetles have been gradually introduced into the country since the 1960s to break down and bury cow manure on the extensive cattle stations, or ranches as they are known in America.

This is despite Australia having over 500 native dung beetle species. However, the native beetles cannot break down the manure effectively as they primarily work with native marsupial scat, which is small and hard compared to cow dung.

A single cow can produce up to 12 cowpats a day, and this number becomes significant when multiplied by an entire cattle herd.

Unburied cow dung can also amass in grazing areas, posing as breeding grounds for various infection-carrying pests as well as the buffalo fly which is a blood-sucking parasite that sticks to the cow’s skin, causing irritation.

The DBEE project was undertaken under the help of researchers from the Commonwealth Scientific and Industrial Research Organisation (CSIRO), with the introduction of the species originally intended for 2021, though the pandemic prolonged the waiting period.

Caron said beetles will be mass-reared in a program led by the Charles Sturt University and will be fed for a year or more, with the new species expected to be released in spring 2023.