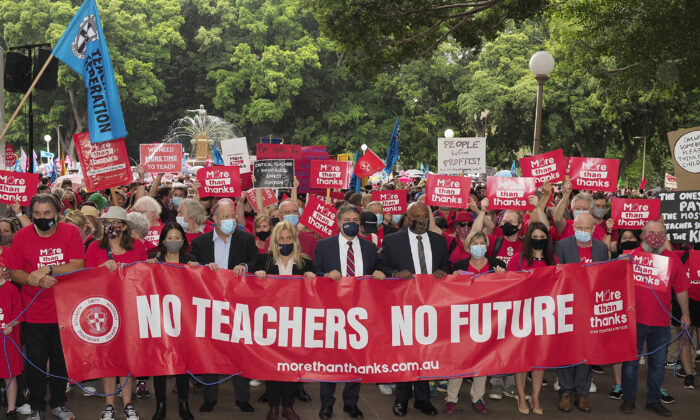 Teachers and principals strike for fairer workloads and wages under the slogan #MoreThanThanks in Sydney, Australia, on Dec. 7, 2021. (Supplied/NSW Teachers Federation)
Australia

The brain drain of New South Wales (NSW) teachers leaving the profession or not being attracted to the job in the first place is the focus of a new parliamentary inquiry.

The probe comes about a month after thousands of NSW public and Catholic schoolteachers walked off the job and protested in Sydney’s CBD, demanding better pay and conditions.

The teachers’ unions want a pay rise of five to seven percent, but the NSW government is offering three percent.

Education Minister Sarah Mitchell has defended the government’s public sector wages policy, calling it the most generous in the country.

Apart from better pay, teachers say the chronic staff shortage is due to a lack of career and financial incentives, leading to unmanageable workloads.

A Monash University report published in June found that more than half of Australian teachers surveyed were planning to quit the profession, with some describing their workload as excessive and unsustainable.

The study surveyed 2444 Australian primary and secondary school teachers across the country.

One of the researchers, Fiona Longmuir, will also be present at the inquiry.

She recommended reducing teachers’ workloads and increasing awareness of the complexity of set tasks to help stem the brain drain.

“But they do feel overwhelmed by the ever-increasing administration and standardisation being thrust upon them, which is arguably not benefiting students.”