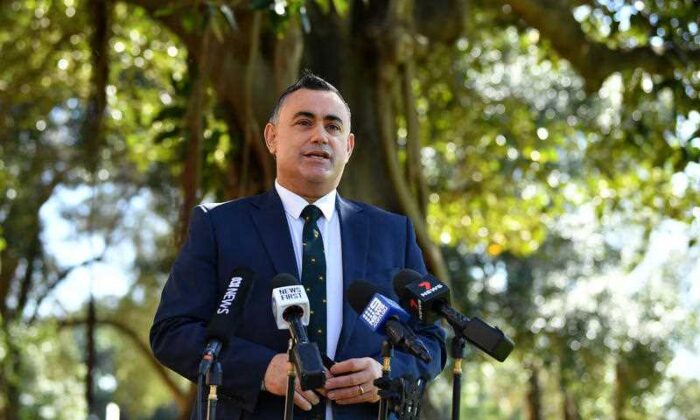 John Barilaro, NSW Deputy Premier and Leader of the National Party, has announced his resignation from politics on Oct. 4 after five years in leadership.

Speaking at a press conference on Monday, Barilaro dismissed rumours that he would be running for the federal election and said he would be leaving politics entirely.

“I am going to be a keen watcher of politics but not a participant,” he said.

“I will make this clear now, so I don’t have to answer the question later—I have no intention and nor will I be running for Monaro or for federal politics. I am leaving politics, and I look to a new career,” he said.

Barilaro said his defamation case with the YouTuber Jordan Shanks—known for the FriendlyJordies Youtube channel—and Google had been a “big reason” for his resignation.

Calling the case unbelievable, the Deputy Premier said that he had had to defend himself from vile and racist attacks in a social media setting. Barilaro noted that as a child of migrant parents, he understood racism implicitly.

“It was very difficult this year,” he said, noting that he would prefer to continue with the defamation case privately.

Barilaro said that Berejiklian’s sudden resignation on Oct. 1 “hasn’t played any part in the decision that I’ve made” and that he was inspired to resign after Minister of Roads and Transport Andrew Constance’s resignation.

“I’ve been thinking about this for a while. I had another date picked in mind, not too far off, but I just think with the opportunities that have now arisen,” he said.

Meanwhile, Youtuber Jordan Shanks issued a statement on Twitter that pushed back at Barilaro’s claims and declared the Deputy Premier had defamed him.

“John Barilaro has the gall to use his final press conference to defame me as a racist. That in itself is a vile and offensive accusation about me that anyone following these issues can see straight through,” Shanks’ statement read.

Barilaro resignation comes after Premier Gladys Berejiklian resigned on Oct. 1 after it was announced the Independent Commission Against Corruption (ICAC) would launch an investigation into the premier.

Currently, NSW Treasurer Dominic Perrottet is set to replace Berejiklian, with Barilaro declaring he genuinely believes that Perrottet would do an excellent job if endorsed as the new premier.

As we emerge from lockdown, we must embrace this time as a new beginning for our State, and welcome the opportunity it presents for a refresh.

I have decided now is the right time for me to hand the reins over to new leadership, and resign as Deputy Premier of NSW. pic.twitter.com/MeWBWMR38P

In regards to possible candidates for National Party Leader, he said that: “I have been serving with incredible people, and anyone can take up that mantle.”

Barilaro added that there is never a right or wrong time to leave politics and that he felt it would be “unfair” to be sworn in with the new premier in the new cabinet and “only weeks later to step aside.”

“Serving as Deputy Premier of NSW, as Leader of the NSW Nationals and as the Member for Monaro has been the honour and privilege of a lifetime.

“I will be calling a Party Room meeting for this Wednesday 6 October where I will formally resign as Leader and call for a ballot for a new Leader.”

The state will now also face at least two by-elections both in Monaro and Willoughby—Berejiklian’s seat.