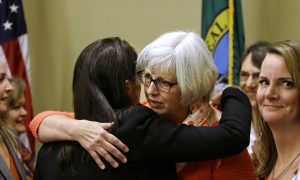 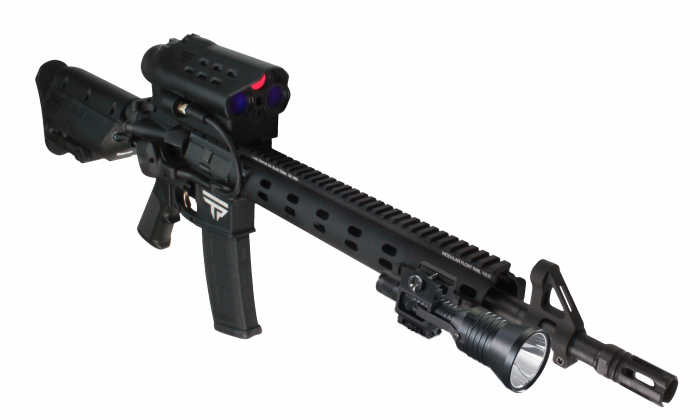 The NightEagle semi-automatic smart rifle is shown in a press image from TrackingPoint. The rifle has technology that automatically tracks targets, and a built-in camera to record video. (Courtesy of TrackingPoint)
Tech

The latest gun from smart rifle manufacturer TrackingPoint comes with a specialized scope that can record video and audio. The Texas-based company is known for its firearms with technology that automatically tracks targets so shots don’t miss.

“As the shooter engages a target he can voice annotate the recorded video in real-time, creating a rich media experience of his engagement to be shared with friends and family,” states a press release.

According to TrackingPoint CEO John McHale, the rifle is being marketed for “predator eradication.” He said in the press release it’s “also well suited for homestead defense, herd management, and dynamic hunting.”

Defense Tech, part of the military.com news network, notes that for sports shooters and hunters, the new scope camera could be great for sharing videos. But for others, such as soldiers, “use of the technology would be questionable, to say the least.”

It notes the Army has been testing precision-guided weapons, including those from TrackingPoint, and the military “almost certainly wouldn’t want first-person video of firefights posted on social media.” There would also be the risk of a crazed shooter uploading videos.

TrackingPoint did not immediately respond to a request for interview, but a company spokeswoman, Kimberly Chung, told Military.com there is always a risk of someone using a gun for ill means, but the video technology would actually help the legal process since it would prove guilt.

Chung noted they also do background checks and require buyers “either come in person to pick up the system or we ship it to a licensed Federal Firearms dealer in their area who will then run a background check on the purchaser before releasing the system to their possession.”

The NightEagle semi-automatic rifle fires the 5.56 NATO round. It has an introductory price of $7,995, but will eventually cost $10,490. Its precision technology can track targets moving up to 10-miles-per-hour, and it also has night vision capabilities.