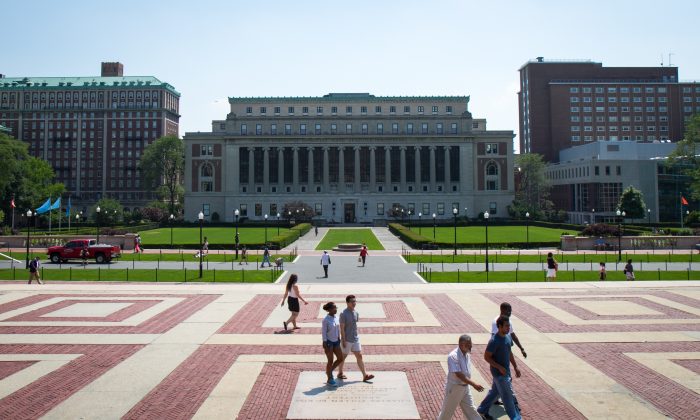 The campus of Columbia University with the Butler Library in the foreground, in Manhattan, in 2012. (Benjamin Chasteen/Epoch Times)
New York

NEW YORK—Emma Sulkowicz, a 21-year-old senior this fall at Columbia College of Columbia University, was raped by a fellow student during her sophomore year.

The experience was so traumatizing that she didn’t tell anyone about it, not even her parents. But when she heard from other students who were also raped by the same man, she decided to report her case to the university’s office for reporting sexual harassment complaints, Student Services for Gender Based and Sexual Misconduct.

She filed a report in April, but did not receive a response until seven months later, long enough for one of the other rape victims to have graduated from school.

School investigators questioned the circumstances of the rape and failed to write down crucial details of the incident in their final report.

In the end, the rapist was not found guilty and is still a student at Columbia.

A woman attending college is more likely to get sexually assaulted than a woman of a similar age group who is not, according to a study done by the National Institute of Justice.

“It doesn’t matter where you go to school, if the campus is big or small, urban or rural, public or private,” U.S. Sen. Kirsten Gillibrand said at a press conference on Wednesday, which Sulkowicz also attended. “If you are a young woman and you attend college in America, the odds jump that you will be sexually assaulted at school, probably by someone you know, from your classroom, your dorm, a party, or at a sports team.”

Gillibrand is pushing to pass a bill, the Campus Accountability and Safety Act, that will require standardized disciplinary procedures for sexual assailants at all U.S. colleges and universities, and heavier penalties for those schools that don’t follow rules on handling sexual offense cases on campus.

On Wednesday, the State University of New York (SUNY), the country’s largest public higher education school system, voiced its support for the bill. The SUNY system includes 64 campuses and more than half a million students.

The news comes ahead of recent revelations that Johns Hopkins University and the University of California, Los Angeles, were the latest schools to come under federal investigation for Title IX violations in its handling of students’ sexual violence and harassment cases. Title IX is a civil law that prohibits schools from discriminating on the basis of sex, which has recently been used to require schools to respond to students’ complaints of sexual offenses.

There are currently 76 colleges and universities being investigated by the U.S. Department of Education’s Office for Civil Rights. Columbia University is not among them.

Gillibrand said she was highly optimistic that the bill will receive the necessary votes to get passed, which is currently supported by eight Democratic senators and seven Republican senators.

Among its provisions are requirements for all campuses to train school staff in dealing with sexual assault cases and give out confidential surveys to students, to allow them to report their experiences with sexual violence. The results of the surveys will then be publicized for prospective high school students and their parents to make decisions about which schools to attend, said Gillibrand.

Under the Jeanne Clery Act, schools are also required to report on-campus crimes and provide victims of sexual assault with specific resources. A 2005 study by the National Institute of Justice found that only about one-third of the country’s schools were in full compliance with the law.

The new bill would fine schools up to $150,000 for failing to comply with the Clery Act and up to one percent of the school’s operating budget for not complying with provisions in the bill.

“Currently, accurate reporting makes a school an outlier because no school wants to be alone in admitting such a serious problem,” Gillibrand said. These fines would act as incentives for schools to properly investigate sexual crimes, rather than fear investigations that can damage the school’s reputation.

Sulkowicz is hopeful the law will put pressure on schools to change their policies. “Holding schools accountable in these very specific ways will increase our safety on campus and pressure them to make real, lasting changes,” she said.

Columbia University announced in a statement that the school plans to implement changes to address sexual assault on campus, including offering bystander training, opening an additional rape crisis center, and adopting a new policy for dealing with “gender-based misconduct” based on recommendations from the U.S. Department of Education and the White House task force on sexual assaults on campus.

On Tuesday, the school canceled a scheduled fall concert, which students speculated was partly due to concerns over increased sexual harassment at similar past events.