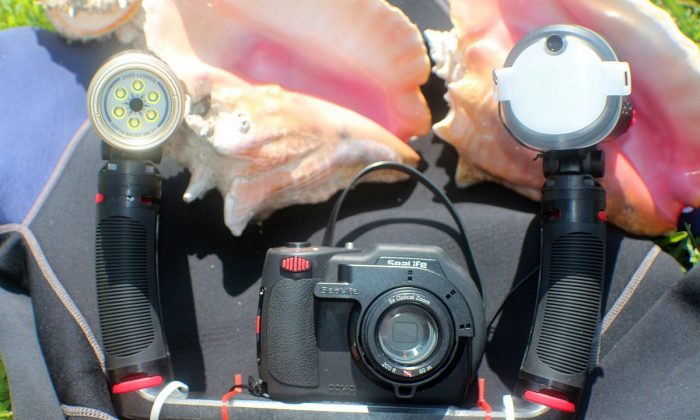 SeaLife camera with Sea Dragon flash and light on brackets. Some personalization is necessary to make the camera unit your own. The author rigged a neck strap and fishing weights to make the unit negatively buoyant underwater. (John Christopher Fine copyright 2014)
News

Training experts at the National Association of Underwater Instructors (NAUI) figure that the average American diver makes 8 to 12 dives a year. Some buy the latest in underwater photography equipment, use it on a few dives then let the camera sit in a closet. It may be geography: diving conditions in northern climes make summer diving feasible and then only weekends are free. The dive vacation turns out to be more family fun in the sun than diving. To be good at anything, the adage ‘practice makes perfect,’ applies. Taking pictures underwater is no exception.

Like computers, after the fall of film, development of new underwater photographic equipment saw a revolution in technology. Little shirt-pocket size cameras are capable of doing all manner of things. They come with thick instruction manuals that the average person has no patience to read.

Taking pictures underwater adds complication to any dive. A camera with strobe is another piece of equipment to carry. Some housed units are cumbersome and bulky. Some mini-units are so small that divers buy long sticks to hold onto them. Some use holsters including a sure to lose underwater head band. They even sell dive masks with an incorporated video camera.

A serious underwater photographer has a lot of sorting to do before plunking down a sizeable sum. Housed point-and-shoot cameras are relatively inexpensive. They are in the $200-300 range. Tiny video cameras, that also shoot stills, with their plastic housings, run about $500 when all the extras are purchased. Housed cameras can cost upwards of $12,000.

I teach diving and make two deep ocean dives most every day. I dive in the Gulf Stream off Florida’s Atlantic coast. When I travel overseas to dive I need camera equipment that is sturdy, reasonable to pack and not cumbersome. In the old days, while I had large housed still and motion picture cameras and lighting, I settled on the Nikonos system with Oceanic strobes.

Compact and perfected, the equipment suited my purpose. I set them up so all I had to do was compose the picture and fire the camera. I had no use for auto-focus. All I want to do is take the picture before the shark or sea turtle swims away.

I’ve settled on the newly developed SeaLife Sea Dragon. The camera is a small 14-megapixel unit that fits into a housing rated for a depth of 200 feet. The housing is sturdy, made with molded rubber over polycarbonate. SeaLife recently produced a lighting package for the camera that includes a Sea Dragon flash and photo-video light.

SeaLife has evolved through several camera models and lighting systems to perfect the new Sea Dragon line. Initially inventors assumed that underwater photographers needed all the little buttons that the camera had. The result was a monstrosity. An invention gone technical where only a single button would have sufficed. Simple is best in underwater photography. There is no time to fiddle with gadgets when a fast moving sea creature appears then swims away.

Land camera digital technology did everything but brew tea. Cameras came with so many buttons and menu options that few owners paid attention to the myriad details in the manual. Underwater these innovations became detriments.

Pre-flash required for auto-focus resulted in long shutter delays. Fish tails were the norm by the time the shutter release was pressed and the photograph taken. Underwater strobes were flimsy, fragile and set up in ways that caused back-scatter in water not crystal clear. Movie lights rendered artificial lighting colors that had to be computer corrected.

Computer programs notwithstanding, a photograph can be taken correctly only once. It is rare in underwater nature photography, save for sessile marine organisms that do not move, that the opportunity to take several pictures of pelagic animals presents itself. The first picture set up has to be perfect. Is my new Sea Dragon equipment what I had with my old film cameras? No. It will never be. What I have done is to adapt the technology to my purpose and tried to master the new tools.

The SeaLife DC 1400, like most pocket-size digital cameras, has an incorporated flash. Its rear panel contains the monitor and control buttons. The camera is capable of taking video clips as well as stills. I am only interested in using it for still photography. Other underwater cameras have been designed for video. When I make motion pictures I use specialized equipment that can produce results for television.

With my SeaLife Sea Dragon camera I want publishable underwater photographs. The image sensor’s 14 megapixels (M) produces a resolution of 4288 x 3216 for still images when shot at 14M in JPEG format. The camera has a six power digital zoom that I never use underwater. A rechargeable 3.7 Volt lithium-ion battery provides ample power for several dives; I take a lot of pictures.

Housed in its rubberized case the strobe port shoots the flash straight out like a car’s headlight. It works for short distances in clear water. Like any flash, if there is particulate matter in the water then back-scatter occurs. Enter the new SeaDragon line of strobes and lights.

I have used all of the previous SeaLife cameras and strobes. It seemed clear that they were invented by non-divers and made to work theoretically. One flash unit had the on-off button on top that meant it was always easily left on or placed on test. Fixed brackets gave little leeway to move the flash or angle it off. The power adjustment level was chancy and many pictures were burned out when working close. The old cameras had the mode button so close to the shutter release that gloved hands pushed it by mistake. Video was shot instead of stills.

The new SeaDragon flash is available with long arms that enable adjustment of the flash. Angling it off so it fires facing backward eliminates back-scatter. The external strobe unit is smaller and comes with a removable diffuser that takes away the harsh quality of strobe light. Light is spread over the photograph. I like that feature for shooting at closer distances. The on-off button is convenient and at the rear of the unit with a bright blue ready light and test button. Brightness can be adjusted with a dial. The strobe unit can be removed easily from the arm and bracket.

The most convenient feature is that the Sea Dragon flash comes with 4 rechargeable AA batteries that provide 150 flashes with a quick recycle time. Older units took time to recycle. My original Oceanic underwater strobes took an aggravating 6 seconds to recycle. That meant sharks had plenty of time to swim away. There is a round battery compartment cap that screws on and an ergonomic knob to remove it. The O- ring is round—alas camera makers discovered, after previous models flooded, that round is good.

My SeaLife package included their new SeaDragon 1200 photo-video light. This light is compact and can be used as a powerful dive light as well. I mount my light and strobe on their bracket, one on each side. This offers lighting for both sides of a subject without the need for two strobes.

In the past I sometimes used movie lights for still photography. Color films were not balanced for the Kelvin temperature of these lights. Adjustment was difficult and pictures appeared too yellow or orange. Computer technology can adjust color when necessary. The strobe and underwater light combination renders pleasing color balance. The 6 bulb 3Watt LED light provides lots of illumination underwater with its 1200 Lumens rating. The light burns for 75 minutes at full power using a rechargeable Lithium-ion 7.4 Volt battery. Like the camera housing the light is rated for 200 feet.

Underwater photography is challenging. Dive conditions dictate use of equipment that is foolproof. Sturdy equipment with proper seals is imperative. The SeaLife 1200 camera housing had a nightmare of an O-ring. It was an odd shape that was very difficult to seat in its groove, imperative to prevent flooding. Their new DC 1400 housing has a large O-ring that is shaped to make seating easy.

Repeat the underwater photography proverbs: ‘Round is good. Simple is best.’

The objective in choosing underwater photography equipment is to make an investment in the best possible camera and lighting for the intended purpose the first time. If you cannot afford the unit you want, wait until you can. Otherwise your second dive will have you back at the dealer hoping to be able to upgrade. For those starting out in underwater photography, for divers like myself that use a camera every day, SeaDragon is convenient and reliable. It is simple enough to be able to take their ‘Quick’ start guide and get going. When I had questions or problems, I found the people at SeaLife, from their Moorestown, New Jersey headquarters, informed and always willing to help.

A special endorsement came from a diver on the boat that recounted his story about failure of his older model SeaLife camera. The unit was no longer supported. The company offered replacement with an upgrade at a reasonable price. He agreed. Then…an extraordinary thing happened. The company called him back and said they would ship him the new unit without cost. They may not do that all the time, however, to hear stories like his means this US based company considers customer service priority.