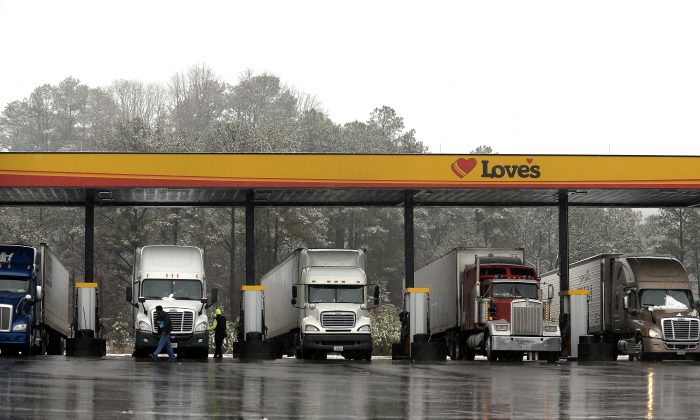 FILE - In this Feb. 11, 2014, file photo, truck drivers stop at a gas station in Emerson, Ga., north of metro Atlanta, to fill up their tractor trailer rigs. (AP Photo/David Tulis, File)
US

WASHINGTON — An estimated 3 million commercial truck and bus drivers must electronically record their hours behind the wheel under a new government rule aimed at enforcing regulations designed to prevent fatigue.

Drivers have been required to keep paper logs of their hours dating back to 1938, but accident investigators and safety advocates have long complained that it’s easy to change the logs or keep two different sets of records to evade restrictions on hours. Electronic logging devices automatically record driving time by monitoring engine hours, vehicle movement, miles driven, and location information.

Efforts to require electronic logs that are more difficult to tamper with have been opposed by drivers who own their truck or small fleets of trucks. The drivers say the companies that hire them to haul freight will be able to access the electronic logs and pressure drivers who haven’t reached their limit of legally-allowed hours to stay on the road even if they want to rest.

The Owner-Operator Independent Drivers Association, which sued the safety administration to block the rule, says on its website that it questions “the need for truckers to spend money on an unproven technology that is no more effective than paper logs when it comes to safety and hours-of-service compliance.”

The safety administration estimates the electronic devices will provide a net savings of $1 billion a year, mostly through paperwork reductions. It also estimate about 26 lives will be saved and 562 injuries prevented each year. The rule also contains procedural and technical provisions designed to protect commercial truck and bus drivers from harassment resulting from information generated by the devices, the agency said.

The rule sets performance and design requirements for the devices. It also exempts from the requirements tow truck drivers, drivers who use time cards to record their hours and trucks and buses older than model year 2000. Drivers living in Canada and Mexico that operate on U.S. roads will also be required to use the devices.

Why Truck Drivers Should Be Worried

Cars and Trucks Are Not All That’s Getting Electrified

“This regulation will change the trucking industry for the better forever,” said Bill Graves, president of the American Trucking Associations, which represents trucking companies.

The rule goes into effect in 60 days, and gives companies two years after that to start using the devices. Companies which have previously installed recording devices that meet current standards but don’t meet requirements of the new rule can continue to use them for four years. The rule permits the use of smart phones and other wireless devices for recording driving hours so long as they satisfy technical specifications and are approved by the agency.

Although the Department of Transportation was ordered by Congress to develop regulations requiring electronic recording devices in 1995, the safety administration didn’t take action until ordered to do so by a federal appeals court in 2004 in a lawsuit regarding limits on trucker hours. The agency’s first attempt at a rule was overturned by another federal appeals court decision in 2011.

Three years ago, Congress again directed the safety administration to issue a rule requiring the devices and set a deadline of Oct. 1, 2013.