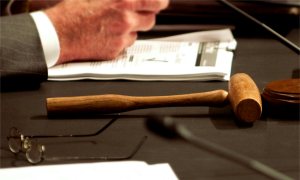 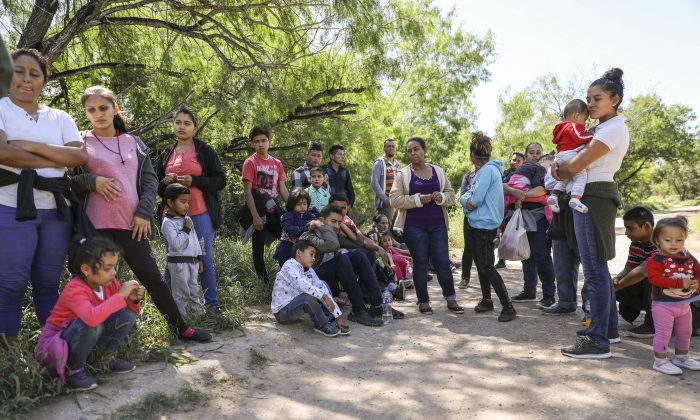 A group of illegal aliens who just crossed the Rio Grande from Mexico near McAllen, Texas, on April 18, 2019. (Charlotte Cuthbertson/The Epoch Times)
US News

WASHINGTON—Immigration watchdog groups are applauding a regulatory overhaul by the Trump administration that aims to restore order to the southern border by detaining migrant families and children beyond the current 20-day limit to allow immigration court proceedings to be completed.

The government says the move will remove incentives to commit immigration fraud and unlawfully exploit children to gain entry to the United States.

The announcement comes as government statistics show that during the first 10 months of the current fiscal year, 475,000 families were “apprehended or encountered” by U.S. immigration officials, which is more than three times any previous full year in history, according to acting Homeland Security Secretary Kevin McAleenan.

The time limit on how long children may be detained was previously imposed by Los Angeles-based U.S. District Judge Dolly Maizie Gee, an Obama appointee, when she found the U.S. Department of Homeland Security in contempt of the 1997 settlement agreement in Flores v. Reno, a decades-old class-action lawsuit that established standards for the detention and release of unaccompanied minors taken into custody by immigration authorities. Gee ruled that any child, including those with parents, can’t be detained more than 20 days, which means asylum claimants are now routinely released before their claims are finally determined.

The Trump administration has been sensitive to public criticism about migrant families being separated during the adjudication process—a policy that existed during the Obama administration—even though seeming examples of fraud by applicants have been identified.

For example, as The Epoch Times has reported, children are being “rented” at the U.S.–Mexico border to pose as part of a fake family for immigration purposes by individuals mindful that they can only be held 20 days and then released into the country.

The rule, which will take effect 60 days after it is published in the Federal Register on Aug. 23, “will permit the Department of Homeland Security to appropriately hold families together and improve the integrity of the immigration system,” McAleenan said.

The Flores Settlement Agreement and its interpretation by the courts have led to chaos on the border, he said.

“The driving factor for this crisis is weakness in our legal framework for immigration. Human smugglers advertise and intending migrants know well that even if they cross the border illegally, arriving at our border with a child has meant they will be released into the United States to wait for court proceedings that can take five years or more,” McAleenan said.

“No child should be a pawn in a scheme to manipulate our immigration system, which is why the new rule eliminates the incentive to exploit children as a free ticket, or as one gentleman in Guatemala told me, a passport for migration to the United States.”

The new rule “allows the federal government to enforce immigration laws as passed by Congress and ensures that all children in U.S. government custody are treated with dignity, respect, and special concern for their particular vulnerability.”

In a statement obtained by The Epoch Times, Dan Stein, president of the Federation for American Immigration Reform (FAIR), praised the new policy, which he described as a “game-changing regulation” by “an administration doing all it can in the face of a do-nothing Congress and activist judges legislating from the bench.”

“This rule will ensure that those who are truly fleeing persecution at the hands of their government are offered quality and compassionate care in the U.S.—with families remaining intact—while their asylum cases are decided.

“The decision also protects the American public, since many of those arriving illegally at our borders with children and seeking asylum are actually just exploiting the system, knowing that they will be released within 20 days. Most will simply disappear into the interior of the country.”

Jessica Vaughan, director of policy studies at the Center for Immigration Studies, said the new regulation will discourage immigration fraud and human-smuggling operations.

“It is better for the families and the children, because for one thing, it’s going to take away a lot of the incentive that people have had to come here in the first place,” Vaughan said.

“People will not make the choice of embarking on this dangerous journey, putting themselves in the hands of criminal smuggling organizations, spending their life savings trying to get to the United States to take advantage of a catch-and-release policy, and if people do make it to the border illegally and are subject to this, they will be able to stay with their family in our custody in a facility that is going to be able to offer them appropriate living situations.”

An open-borders group criticized the new rule, saying it opens the door to indefinite detention of migrants.

“The government should NOT be jailing kids, and certainly shouldn’t be seeking to put more kids in jail for longer,” the American Civil Liberties Union wrote on Twitter after the rule was unveiled. “This is yet another cruel attack on children, who this administration has targeted again and again with its anti-immigrant policies.”

“Families will not be held indefinitely, as the media has falsely claimed,” Morgan said.

“They will be held until their immigration proceedings are over, averaging between 40 to 60 days.”