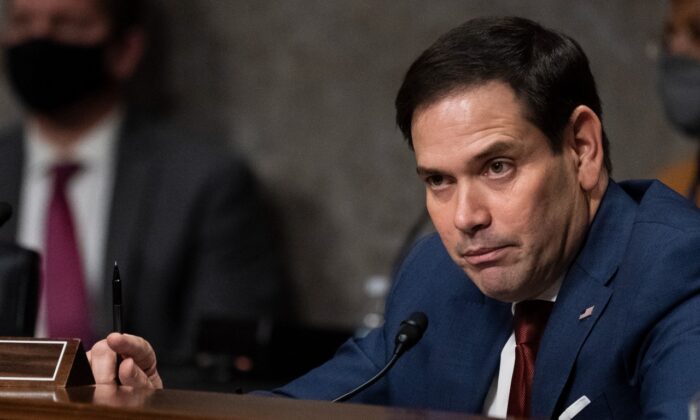 Tough new U.S. sanctions will be imposed on China under a bill introduced Jan. 11 by Sen. Marco Rubio (R-Fla.) and 15 co-sponsors if Beijing continues to refuse to “allow for a credible and comprehensive international investigation into the origins of COVID-19 at laboratories in Wuhan.”

The sanctions would become effective within 90 days after passage of the ‘‘Coronavirus Origin Validation, Investigation, and Determination Act of 2022’’ (COVID) if Beijing refuses to allow such a probe into the virus that has killed more than 800,000 Americans since March 2020.

“For two years, the Chinese Communist Party (CCP) has stonewalled all efforts to uncover the true origins of COVID-19,” Rubio said in a statement. “We know the virus originated in China, however, the CCP’s attempts to obfuscate the truth has led to countless deaths and needless suffering worldwide. It is clear that Beijing will only respond to concerted pressure from the United States and the international community. My bill will force the CCP to the table.”

If Congress approves the Rubio proposal and President Joe Biden signs it into law, the measure “would sanction the leadership of the Chinese Academy of Sciences (CAS) and its affiliated institutes and laboratories, including the Wuhan Institute of Virology. The COVID Act would also suspend federal research funding across all academic fields for studies that involve the CAS, and impose a prohibition on gain-of-function virus research cooperation between any individual or institution based in the United States that receives federal funding and any PRC-based individual or institution,” according to the statement.

The new bill’s sanctions would be in addition to those provided in a measure Rubio introduced in June 2021.

“The Chinese Communist Party does not want a full, forensic investigation into the origins of COVID-19,” Rubio said when introducing the June proposal. “If they did, it would have happened at some point during the last 18 months.

“Instead of hoping the Chinese authorities will suddenly cooperate, the United States needs to compel them to cooperate. One obvious step in that direction is to cut off federal funding for research conducted with these state-run Chinese entities.

“Additionally, we must impose sanctions against the leadership of these entities and exact a personal cost. It is time for the U.S. to take action and lead an international response that settles for nothing less than a full forensic investigation of the Wuhan labs.”

“Again and again, General Secretary Xi and his underlings in the Chinese Communist Party have blocked attempts to find the truth by lying about COVID’s transmission, censoring doctors and shifting blame. It’s time for Communist China to come clean and answer for its lies and cover-up on the origins of COVID-19,” said Florida’s Scott in the statement.

“COVID-19 has taken the lives of over 800,000 people in the United States so far. Families who’ve lost loved ones to this devastating virus deserve answers–especially if the Chinese Communist Party is responsible for either unleashing this virus or covering it up,” Grassley said.

“Our bill requires an investigation into COVID-19’s origins and holds China accountable by sanctioning those who’ve stonewalled independent investigations. We ought to make sure there are harsh consequences for any individual or organization that played a part in starting or perpetuating this pandemic,” Grassley added.