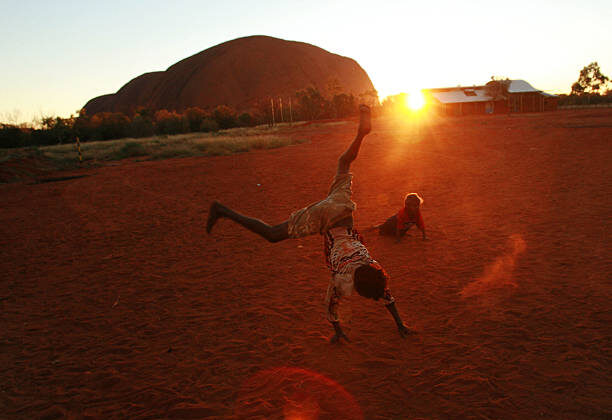 A child plays at sunset in the Aboriginal community of Mutitjulu, in the shadow of Uluru, in the Northern Territory, Australia, 26 June 2007. (Photo by Jason South/The AGE/Fairfax Media via Getty Images via Getty Images)
Australia

The Northern Territory (NT) government will introduce new public health measures in remote communities where less than 70 percent of residents have had their first COVID-19 shot.

According to Northern Territory Health, from Nov.15 anyone entering these communities from Darwin, Alice Springs, Katherine, or outside the Territory will have to wear a mask in public areas for seven days, and from Nov.19 they will also need to test negative to COVID-19 within 72 hours of entering a community.

This comes on the back of Doherty Institute modelling, which has set a higher benchmark for remote communities, meaning the 80 percent double-dosed target will now extend to those aged five to eleven. However, this will only be applied once a TGA approved vaccine for this age group is available.

Chief Minister Michael Gunner said that “we have many communities that are well below 80% and we still have a critical task ahead of us to push these rates up, which we will continue to do.”

There are already some measures in place in all communities, one of which is a mandate that workers entering any remote community must have their first jab by Nov.12, and their second by Dec.24

Meanwhile, the lockout of unvaccinated residents in Darwin has been extended to 11:59 p.m. on Tuesday, while the lockdown in Katherine ended at 5 p.m. on Monday.

These restrictions had been in response to the Territory’s first community case of COVID-19, a contractor at Royal Australian Air Force Tindal base who tested positive on Nov.4.

It is now known that the source of the man’s infection was a COVID-19-positive woman in her 20s who flew to Darwin from Cairns on Oct. 29 and spent the weekend with him.

According to the Guardian on Nov. 7,  the woman lied on her border entry form when entering Darwin and has since been fined $5,024.

Chief Minister Gunner said that her actions had “put the Territory at risk,” prompting the Katherine lockdown and Greater Darwin lockout, reported the Guardian.