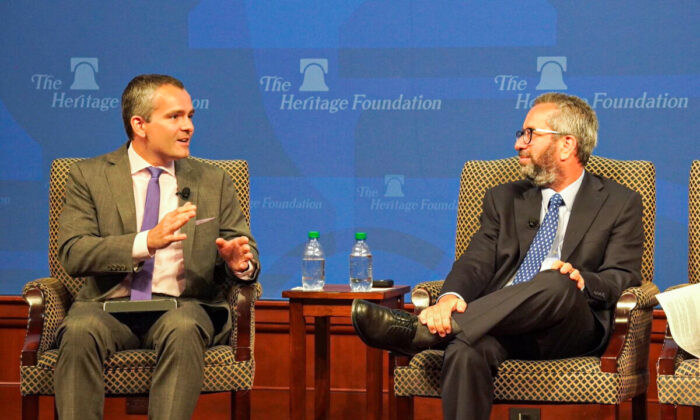 WASHINGTON—New Heritage Foundation research shows that access to puberty blockers and cross-sex hormones does not reduce youth suicide rates. This challenges a key argument that such access to gender transition drugs saves lives.

Jay Greene, a senior research fellow at the conservative think tank’s center for education policy, authored a report on the findings, hoping the new evidence would allow policymakers to take more cautious and deliberate approaches to set regulations.

“Policymakers and parents are essentially being emotionally blackmailed with the threat that if they don’t make these drugs widely and readily available, young people will kill themselves,” Greene told The Epoch Times. “And this short circuits all other kinds of discussions and considerations because it’s such a horrific thing. No one wants to be responsible for that.”

The analysis measured suicide rates in the age group between 12 and 23—the age range of recipients of gender transition drugs—in two state groups: 33 states plus D.C. requiring parental consent for minors to undergo routine medical care and 17 states that don’t require approval from parents.

These legal provisions were for any health care, not on gender-related care only. Greene said including all in the age group would avoid isolating individuals from the impact of their social contagion.

The two groups didn’t show a difference in their youth suicide rates before 2010, when the use of puberty blockers and cross-sex hormones became more commonly available in the United States. However, between 2010 and 2020, the group of states with no limit on access showed 14 percent higher youth suicide rates than those with access restrictions.

The Foundation hosted a panel discussion on Tuesday to release the report findings.

Panelist Jay Richards, director at the DeVos Center for Life, Religion, and Family at the Heritage Foundation, said he was convinced that childhood suicide was the only thing that would overcome parents’ natural aversion to their children’s gender transition, and that was why advocates focused their efforts on the suicide issue: a choice between a living son or a dead daughter.

Regarding federal policymakers’ push for gender transition therapies, Richards said it was “essentially an appeasement of radical gender activists.”

“There are deeply committed ideologues behind this and a large amount of money behind it,” he added.

Another panelist, Virginia Gentles, director of the education freedom center with a national advocacy group Independent Women’s Forum, said the “potent combination of anger and hope” would help parents overcome the fear of even questioning the gender transition path for their children: “We are going to see more and more angry parents. We will see detransitioners speaking up and expressing their anger that the adults in their life so mistreated them and led them down the dangerous path.”