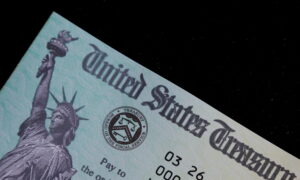 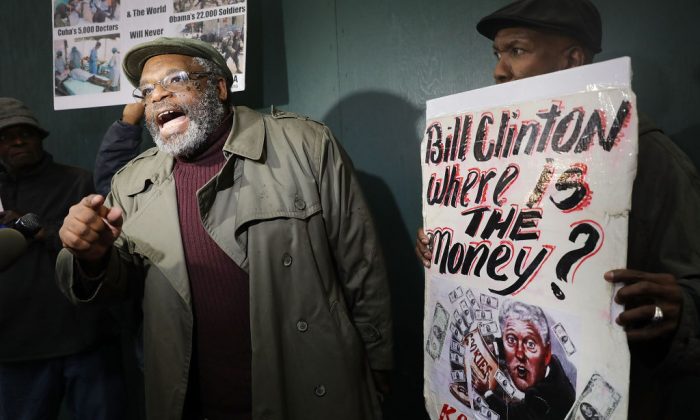 Haitian activists protest in front of the Clinton Foundation on the eighth anniversary of the Haitian earthquake, in New York City, on Jan. 12, 2018. (Spencer Platt/Getty Images)
Politics

Another source of Clinton cash, fees from speaking engagements, also did a major dip. In 2015, the Clintons received $3.6 million in speaking fees. In 2017, that number dropped to $300,000, according to the Post.

The foundation said the drop is due to internal moves.

“We anticipated a decline in both revenue and expenses for 2017, largely attributable to the absence of sponsorship and membership contributions for CGI,” a foundation spokesman told the Post. CGI refers to the Clinton Global Initiative, a foundation project that was shut down.

The foundation has long been the subject of an investigation into misuse of funds along with a pay-to-play scheme during Hillary Clinton’s time as secretary of state, according to the Post.

The investigation was initiated by the FBI in the Clintons’ home state of Arkansas, and is overseen by the local U.S. attorney’s office, CNN and the Post reported.

Leading up to the presidential election, Hillary Clinton was asked specific questions about accusations against the foundation during a debate between Clinton and Donald Trump, via PBS NewsHour.

“(E)mails show that donors got special access to you. Those seeking grants for Haiti relief were considered separately from non-donors, and some of those donors got contracts, government contracts, tax payer money,” debate moderator Chris Wallace asked Clinton.

Clinton went around the topic, never directly addressing or denying the allegations. She goes on to just praise the work of the foundation.

Wallace stops her and tries again to get a direct answer.

“The specific question went to pay-for-play. Do you want to talk about that …?” Clinton doesn’t stop to pick up the question. Wallace then asked Trump to talk about his knowledge of the foundation, while Clinton tried to heap more praise on the foundation.

Trump goes on to talk about the hatred that has built up in Haitian-American communities as a result of the Clintons’ alleged taking of donations from the 2012 Haiti earthquake relief initiative, where there are questions as to whether or not that money ever reached Haiti.

At the time of the earthquake, Hillary Clinton was secretary of state and Bill Clinton was the UN special envoy to Haiti. Many Haitians blame them for the extremely slow recovery efforts despite the massive aid and donations that were supposed to reach the nation, BBC reported.