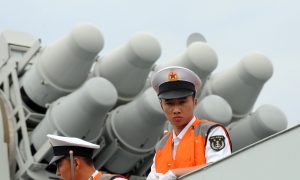 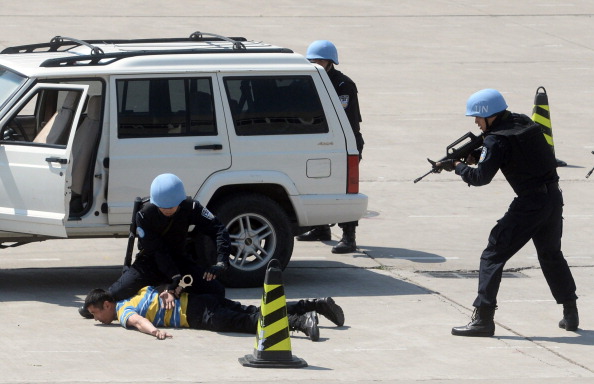 Chinese peacekeeping police take part in drills in Langfang, in northern China's Hebei Province, before they leave for a United Nations peacekeeping mission in Liberia, on May 4, 2014. (STR/AFP/Getty Images)
Africa

China is backing infrastructure projects it has financed in Africa with an ever-increasing military presence on the continent—and locals are feeling uneasy about the situation, according to a recent report.

African Center for Strategic Studies (ACSS), a Pentagon-backed institution funded by the U.S. Congress, published a report titled “Chinese Hard Power Supports Its Growing Strategic Interests in Africa” on Jan. 17. It details how China has significantly expanded its military presence in Africa since 2015. At the time, China had just passed a new national security law that provided a legal basis for the Chinese regime to deploy security forces abroad in order to protect its foreign interests.

The report found that the primary reason behind China’s military deployment was to safeguard Chinese infrastructure projects and Chinese expatriates who were working at these projects in Africa under China’s “One Belt, One Road” (OBOR, also known as Belt and Road) initiative.

China launched the OBOR initiative in 2013 to build up geopolitical influence around the world, chiefly by partnering with more than 60 countries across Asia, Europe, Africa, and Latin America on massive infrastructure projects.

In 2015, China published its second Africa policy paper, stating that China would strength military exchanges and cooperation such as carrying out joint military training and exercises, as well as helping African countries to “enhance their capacity building in national defense and peacekeeping.”

China’s security concerns with OBOR projects in Africa were outlined in September 2018, when Beijing released an action plan for 2019 to 2021, following the Beijing Summit of Forum on China-Africa Cooperation (FOCAC). The plan called for “stepping up ‘Belt and Road’ Security cooperation with particular focus on railways, industrial parks, and major events,” as well as protecting Chinese nationals and Chinese companies.

But African citizens are worried about the increased Chinese military activity and are “pressuring their leaders to manage their security relationships with China in ways that avoid reinforcing these trends,” the ACSS report stated.

Two years after passing the new national security law, in 2017, Beijing established its first foreign naval base in Djibouti, and China’s military, called the People’s Liberation Army (PLA), conducted live military exercises with armored vehicles and heavy artillery at the base in November that year.

The U.S. military also has a military base in Djibouti, with over 4,000 military personnel stationed there. The base serves as a launching pad for operations in Africa. In March 2018, Joshua Meservey, senior policy analyst for Africa and the Middle East at the U.S. think tank Heritage Foundation, warned about the risks of Chinese proximity, in congressional testimony.

“Beijing holds Djiboutian debt worth about 60 percent of the country’s gross domestic product, giving it significant leverage over a country critical to U.S. military operations in Africa,” Meservey stated.

In 2018, Beijing vamped up its influence by holding military drills in several African countries, including Cameroon, Gabon, Ghana, and Nigeria, according to the ACSS report. Additionally, Beijing worked with countries like Ethiopia, Sierra Leone, Sudan, and Zambia to provide combat casualty care.

In Namibia, local media raised concerns that China’s expansion project at the Port of Walvis Bay could eventually lead to Beijing building naval facilities at the port—which is what happened in Djibouti, according to the ACSS report. China was first contracted to build a deep-water port at Djibouti.

According to a May 2018 article by China’s state-run media Xinhua, the Port of Walvis Bay project is being helmed by China’s state-owned China Harbor Engineering Company. The firm will expand the port’s throughput capacity to 750,000 twenty-foot equivalent units (TEUs), in addition to building an oil storage facility and a cruise jetty.

Even without any military facilities, the Namibia port would serve as an important hub connecting to southern Africa, as well as other Chinese ports and infrastructure being built in São Tomé and Príncipe, Cameroon, Nigeria, Ghana, the Ivory Coast, and Guinea.

Beijing is also exerting great influence in Africa’s security sectors through its peacekeeping efforts with the United Nations, according to the ACSS report.

The appearance of goodwill is aimed at helping the Chinese regime pursue OBOR projects in African nations.

For instance, in Mali, the PLA sent its 6th Battle Group as part of a U.N.-led peacekeeping operation in the country.

According to the ACSS report, Mali’s geographic location is strategically ideal for Beijing’s effort to extend the OBOR initiative into the greater West African region, with rail links being built by Chinese companies connecting Mali to ports in Dakar, the capital of Senegal, and Conakry, the capital of Guinea.

China has chiefly used two peacekeeping missions to fulfill its foreign policy goals. First, Beijing has supported the African Standby Force (ASF)—an international peacekeeping force under the direction of the African Union—such as by providing $25 million to ASF’s logistics based in Cameroon in February 2018.

Second, Beijing has raised its own 8,000-strong standby force of United Nations peacekeepers.

China’s peacekeeping efforts are “supplemented by high-level Chinese mediation activities,” according to the ACSS report, in countries like the Democratic Republic of the Congo, South Sudan, Sudan, and Zimbabwe.

But the report warned that these mediation attempts are “often aimed at maintaining authoritarian leaders with whom Beijing has good relations and through which strategic investments in natural resources and infrastructure can be secured.”