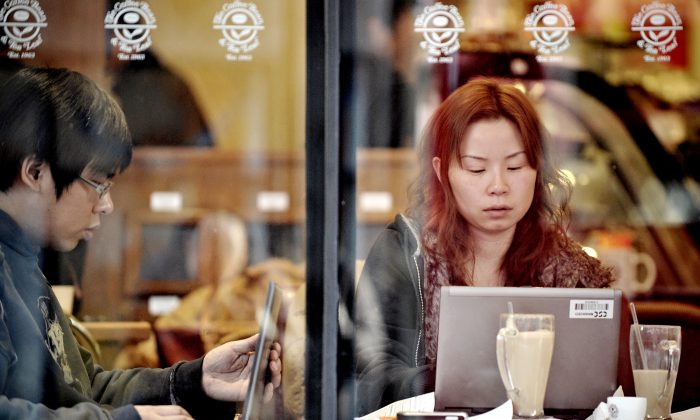 People surf the internet in a cafe in Shanghai in this file photo. (PHILIPPE LOPEZ/AFP/Getty Images)
Social Issues

The Chinese Communist Party (CCP) is set on further silencing dissent on the Chinese internet with just-released guidelines for the news industry.

On Oct. 30, the CCP’s main agency in charge of internet censorship and monitoring, the Cyberspace Administration, issued a notice about content created by what it called “internet news information services.”

Effective Dec. 1, internet content creators will be required to uphold “correct” political stances and to direct public opinion in the “correct” way, per the CCP’s directives.

They are to “persevere in the news viewpoints of Marxism and the core values of socialism,” according to the notice. The rules will apply to instant messaging and video content as well.

A former journalist with the Chinese newspaper Zhejiang Youth Times, Wei Zhenling, said his news stories were often edited beyond recognition before getting the OK to be published.

Effective Dec. 1, internet content creators will be required to uphold ‘correct’ political stances and to direct public opinion in the ‘correct’ way

“You have to be the Party’s mouthpiece. You report only what the Party allows you to. What the Party considers right, you cannot consider it wrong,” he said.

He believes the new guidelines are meant to stamp out any remaining free space for self-expression on the internet.

The CCP wants to censor the content that it still hasn’t been able to completely control, and ensure that the public only sees the propaganda pushed out by official state media, he added.

In the notice, the Cyberspace Administration also said central authorities and local offices of the administration will establish files on news content creators, create a blacklist, and potentially implement a system to report news writers who don’t follow guidelines.

Increasingly, journalists are turning to the internet to release information, some of which may get caught in the crosshairs of Chinese authorities. In China, information is still severely restricted by a firewall, and Chinese authorities constantly censor content that does not toe the Party line—from politics to the environment, to any news that may put the CCP in an unsavoury light. Staff at internet companies are hired to monitor content and report users who express dissent.

In September, a journalist who published an online story about missing university students in Wuhan City was detained by local police. His story was quickly pulled, but not before it had been reposted many times.

Former journalist Wei noted that many ordinary citizens are also collecting and disseminating first-hand information on the internet, which the CCP views as a threat. “If you take a video of something, post it on the internet, the CCP cannot completely control that. So now it is using methods like requiring online registration using your real name, or establishing a credit record [for how someone is behaving online],” he said.

In September, a user on the popular instant messaging service WeChat posted evidence of pirated books in the collection of a renowned Beijing library. The library was shut down as a result. In this case, the authorities sided with the WeChat user.

But if a user posts something the authorities don’t approve of, they can immediately find out the user’s identity, as WeChat users are required to register with a cellphone number.

In May, the Ministry of Industry and Information Technology mandated that all telecoms operators must require their users to use real names when registering. All cellphone users are also required to register with their real names.

One from Shanxi Province posted, “Everything is shut down, and only People’s Daily, Xinhua, CCTV [all state mouthpiece media] will be left.”

Another from Shandong Province simply wrote, “A free country.”

Xiao Lusheng contributed to this report.