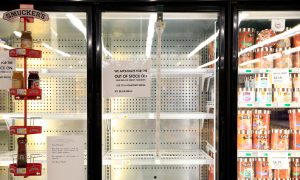 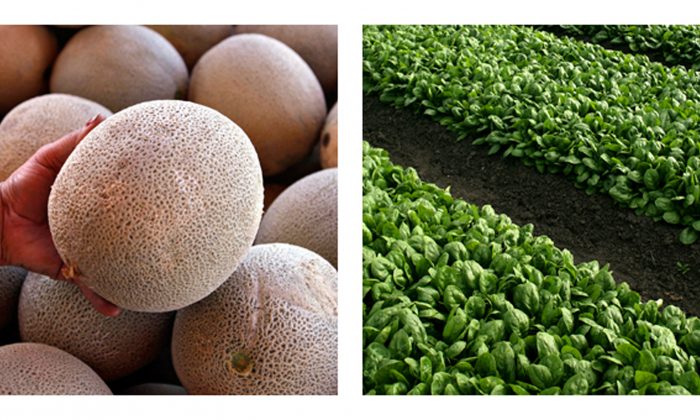 An operator of a fruit and vegetable stand near Denver holds a cantaloupe, on Sept. 16, 2011, and untainted spinach grows near Castroville, Calif., on Sept. 18, 2006. (AP Photos)
US

WASHINGTON—New produce safety rules from the government Friday are intended to help prevent the kind of large-scale outbreaks of foodborne illness that occurred over the past decade linked to fresh spinach, cantaloupes, cucumbers and other foods.

Under the rules, the government soon will have new oversight of the farms that grow Americans’ food. That means, for example, making sure workers are trained to wash their hands, irrigation water is monitored for harmful bacteria and animals do not leave droppings in fields.

The majority of farmers and food manufacturers already follow good safety practices, but the rules are intended to give greater focus on prevention in a system that has been largely reactive after large outbreaks. The Centers for Disease Control and Prevention estimate that 48 million people—or 1 in 6 people in the United States—are sickened each year from foodborne diseases, and an estimated 3,000 people die.

The Obama administration has said it wants people to eat more fruits and vegetables, so it is essential to ensure produce safety.

The regulations are tailored to cover foods and growing methods that pose the greatest risk, and they target produce such as berries, melons, leafy greens and other items usually eaten raw and more prone to contamination. A farm that produces green beans that will be cooked and canned, for example, would not be regulated. There are also exemptions for smaller farms.

The Food and Drug Administration has haggled over how to write the rules since Congress approved them in 2010. The agency has tried to find a balance between food safety and regulating farms with safety measures already in place.

The rules are new territory for the agency, which has never before had such broad authority to oversee how food is grown on farms. The FDA originally proposed the produce rules in 2013, but rewrote them last year after some farmers said they would be too burdensome. The final rules largely follow that rewrite.

The rules require farmers to test irrigation water quality, regularly train workers on the best health and hygiene practices, and monitor wildlife that may intrude on growing fields, among other measures.

Compared with the original proposal, the final rule requires less stringent standards for irrigation water quality and reduces the frequency of testing, in some cases. The organic industry had expressed concerns about the rules, especially because many organic farmers use raw manure as fertilizer and try to treat irrigation water with fewer chemicals.

Advocates for food safety laws have cited the pressing need after several high-profile foodborne illness outbreaks. In 2006, E. coli in fresh spinach was linked to several deaths, including a 2-year-old. A 2011 outbreak of listeria linked to cantaloupes killed 30 people. This year, four people have died in a salmonella outbreak linked to Mexican cucumbers.

Also on Friday, the FDA released new rules to ensure the safety of food imported for the U.S. market.

These rules could help prevent against outbreaks such as the salmonella in Mexican cucumbers or cyclospora illnesses linked to Mexican cilantro. The FDA said the cilantro was grown in fields where American investigators found toilet paper and human feces.

The FDA issued separate rules aimed at food manufacturing facilities in September. The 2010 food safety law also authorized more inspections by the FDA and gave the agency additional powers to shut down facilities.