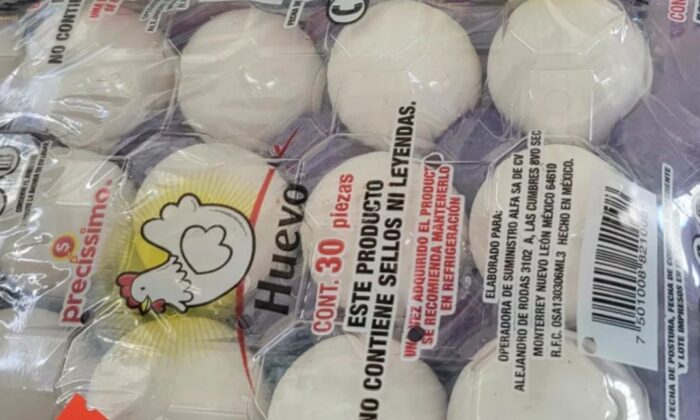 A photo taken from the Paso Del Norte internal crossing in El Paso on January 18, 2023, shows eggs taken by a customs officer. (U.S. Customs and Border Protection)
By Jack Phillips

“The San Diego Field Office has recently noticed an increase in the number of eggs intercepted at our ports of entry,” Director of Field Operations Jennifer De La O wrote on Tuesday. “As a reminder, uncooked eggs are prohibited entry from Mexico into the U.S. Failure to declare agriculture items can result in penalties of up to $10,000.”

Over the past year, the price of eggs has soared in supermarkets across the U.S. As of December, Grade A Large eggs cost about $4.25 per dozen, on average, more than twice the price from the $1.79 average in December in 2021, data from the U.S. Bureau of Labor Statistics show.

A 30-count carton of eggs in border city Ciudad Juarez, Mexico, sells for $3.40, according to Border Report. U.S. Customs and Border Protection (CBP) spokesperson Gerrelaine Alcordo told NPR that people are bringing eggs from Juarez to the nearby city of El Paso, Texas, because they’re “significantly less expensive” there.

A recent report from the Los Angeles Times, meanwhile, said that a dozen eggs are being priced as high as $7.37 in Los Angeles.

The San Diego Field Office has recently noticed an increase in the number of eggs intercepted at our ports of entry. As a reminder, uncooked eggs are prohibited entry from Mexico into the U.S. Failure to declare agriculture items can result in penalties of up to $10,000. pic.twitter.com/ukMUvyKDmL

But officials say that bringing uncooked eggs from Mexico into the United States is illegal due to the risk of avian influenza and other diseases that affect birds. Industry officials have said that bird flu outbreaks among laying chickens have contributed to the price surge, although some farm groups say that the high prices are attempts to gouge customers.

“There has been a large increase in the volume of prohibited food items, such as raw eggs and raw poultry meat, brought by travelers from Mexico. We would like to remind the traveling public that federal agricultural regulations remain in effect,” De La O said in a news release.

The U.S. Department of Agriculture banned eggs from Mexico in 2012. The reason, it said (pdf) at the time, is due to the “diagnosis of highly pathogenic avian influenza in commercial poultry” in the country.

Alcordo told CNN that the rise in egg-smuggling attempts is caused by the high cost of eggs. Alcordo said that the increase has been reported at the popular Tijuana-San Diego crossing and “other southwest border locations.”

In most cases, Alcordo said, travelers declare that they have eggs while trying to cross. “When that happens the person can abandon the product without consequence. CBP agriculture specialists will collect and then destroy the eggs (and other prohibited food/ag products) as is the routine course of action,” Alcordo added.

Another official said that if someone is caught trying to smuggle them into the United States, they can face fines.

An attempt to root out smuggling “starts with a basic line of questioning from the officer, and it leads up to our canine enforcement team for the agriculture inspectors. Our canines are trained to sniff out prohibited foods and merchandise, such as in this case the eggs,” CBP Public Affairs Liaison Francisco Rodriguez told a local Texas affiliate KRGV-TV.

A farmer advocacy group, meanwhile, claimed that the high egg prices are being caused by a “collusive scheme” among major egg producers to fix prices, according to a recent letter sent to the Federal Trade Commission. Claims that avian influenza caused the price surge are false, it said.

Recent flu “figures seem to support the theory that the avian flu outbreak of 2022 was significant, its actual impact on the egg supply was minimal,” the letter said. “After accounting for chicks hatched during the year, the average size of the egg-laying flock in any given month of 2022 was never more than 7-8 percent lower than it was a year prior.”

In a statement to Reuters, Cal-Maine said that higher production costs, along with avian flu, were contributing to higher prices. The American Egg Board, an egg marketing group, said in a statement that egg prices reflect a variety of factors and that wholesale egg prices are beginning to fall.