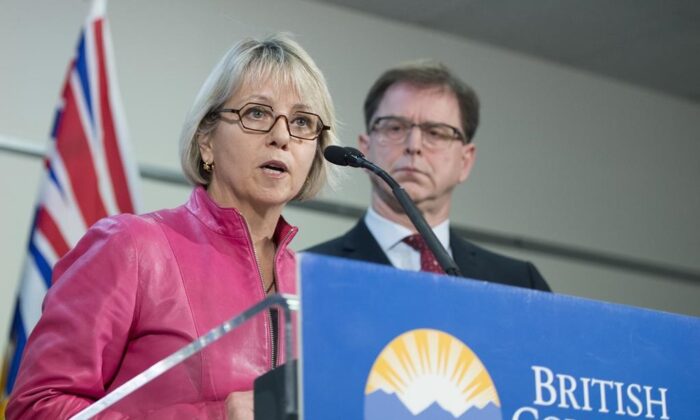 VANCOUVER—B.C. health officials believe a woman in her 50s in the Vancouver area has contracted the new coronavirus.

The provincial health officer says the woman is in stable condition in isolation at home, where a small number of her family members visiting from Hubei province in China are also staying.

Dr. Bonnie Henry said on Feb. 4 it is a presumptive case of the virus until positive test results come back from samples sent to the National Microbiology Lab in Winnipeg, which she expects to happen.

Hubei, especially the city of Wuhan, is at the centre of the outbreak in China.

The patient was assessed in hospital after becoming ill a few days ago, said Henry, and the testing for the new coronavirus came back positive late on Feb. 3.

She said a small number of family members from China are also staying at the woman’s home.

If the case is confirmed, it would be the fifth case in Canada, with one other case in B.C. and three in Ontario.

“This case is not unexpected. It tells us that our system is working, that we’re finding people, that we’re assessing them safely in the hospital setting,” Henry told a news conference.

B.C. Health Minister Adrian Dix said health officials are taking all the necessary steps both to assist the woman and also to ensure that people she may have come in contact with are safe as well.

The woman’s family members left Wuhan before travel restrictions were put in place by the Chinese government, said Henry, and they have been minimizing contact with people outside the home.

Vancouver Coastal Health is following up with anyone the woman has been in close contact with before reaching out to anyone who may have had more peripheral contact, Henry said.

In a joint statement, Dix and Henry said the risk of the virus spreading within B.C. remains low.

The transmission of the new coronavirus depends on proximity to someone who is infected, said Henry.

“It’s very different if you’re living in a household with somebody versus walking your dog down the street every now and then,” she said.

A charter plane for Canadians in China is expected to leave on Feb. 6. As of Feb. 4, the federal government said 308 Canadians have asked for help to leave the country, but the plane only has room for about 250 passengers.

Henry said it’s estimated that about one third of the passengers on the flight will return to B.C. after a 14−day isolation period at Canadian Forces Base Trenton.

The plane is set to refuel at Vancouver International Airport, she said, and officials are preparing in case anyone needs to be taken from the plane before it continues on to Ontario.

Canadian Forces medical personnel will be on board the flight from China and the plane will allow for a separate isolation area should a passenger develop symptoms during the flight, said Henry.

To prevent the transmission of the virus, Henry advised people to wash their hands regularly, cover their mouths when coughing and to stay home if they are sick. She also urged anyone who has been in Hubei province within the last two weeks to stay away from other people until the incubation period for the virus has passed, and to contact public health officials with any concerns about symptoms.