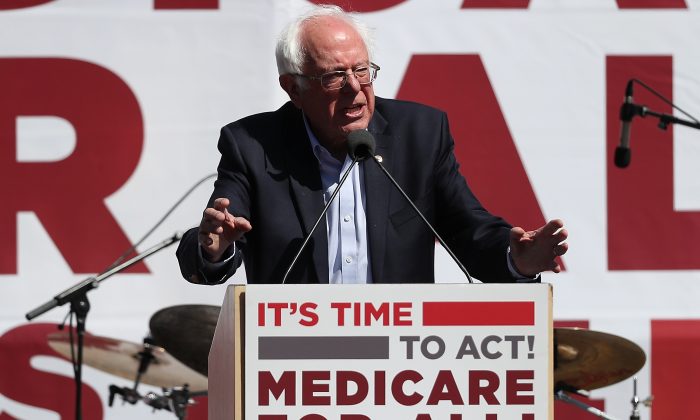 Sanders has pulled ahead of the former vice president in the New Hampshire poll, with 29 percent of respondents saying they would vote for the self-avowed “democratic socialist.”

According to the Hoover Institute’s Paul R. Gregory: “Sanders reveals little about what socialism means to him, other than giving many things away free. He disarms critics by asserting that he is not a ‘socialist’ but a ‘Democratic Socialist,’ without defining what that means.”

Biden came in second with 21 percent of the vote and Massachusetts U.S. Sen Elizabeth Warren placed third with 17 percent, in what is shaping up to be a three-candidate contest.

The new poll showing Sanders pulling ahead of the pack was released on Wednesday, Sept. 11. Conducted by telephone between Sept. 4-10, the Franklin Pierce University/Boston Herald Poll measured voter preference among Democratic voters in New Hampshire, with a margin of error of +/- 3.4 percent.

The poll also asked Republican respondents about whether they approved of the job President Donald Trump was doing and a significant 83 percent said yes.

July Poll: 54 Percent of Americans in the South Approve of Trump

A July poll found that 54 percent of Americans in the south approve of the way President Donald Trump is handling his job as the country’s commander-in-chief.

According to the recent NBC News|SurveyMonkey online poll (pdf), conducted between July 2 and 16, 38 percent of Americans in the south “strongly approve” of Trump’s job as president, while 16 percent expressed that they “somewhat approve” his handling of the job. This is up from a total approval of 52 percent based on the same poll conducted in September last year.

‘How Socialist Is Bernie Sanders?’

“Sanders has spent a long political career obfuscating his true political beliefs,” Gregory argues in his op-ed headlined “How Socialist Is Bernie Sanders?”

“The media rarely pushes back on his standard platitudes, such as, ‘We must create an economy that works for all, not just the very wealthy.'” Gregory adds that Sanders’s “two-minute video, promising to explain his brand of socialism, leaves the viewer clueless, probably deliberately.”

Sanders said during a CNN interview on June 12 that Americans would love to pay more in taxes in exchange for the government taking over the entire healthcare system.

“Look, what we have to understand, for example … the United States is the only major country on Earth not to guarantee healthcare to all people as a right,” Sanders said.

“Yeah, but I suspect that a lot of people in the country would be delighted to pay more in taxes if they had comprehensive healthcare as a human right,” Sanders responded. “I live 50 miles away from the Canadian border. You go to the doctor any time you want. You don’t take out your wallet. You have heart surgery, you have a heart transplant and you come out of the hospital and it costs you nothing.”

“Your kids in many countries around the world can go to the public colleges and universities tuition-free, wages in many cases are higher,” Sanders added. “So there is a tradeoff, but at the end of the day, I think, that most people will believe they will be better off when their kids have educational opportunities without out-of-pocket expenses and when they have healthcare as a human right and they have affordable housing, when they have decent retirement security, I think most Americans will understand that is a good deal.”

Sanders has struggled to provide figures on how much his wide-ranging proposals would cost. According to an analysis by the Mercatus Center, expanding Medicare to every American would cost more than $32 trillion over 10 years.

In his study, Charles Blahous argues that such a massive cost increase would be highly cumbersome. He says that even doubling all federal individual and corporate income tax collections would fall short of fully funding Sanders’s universal health care scheme.

“Marx declared that a socialist revolution would be required to part the capitalists from their capital,” Gregory writes in the op-ed. “Democratic Socialists (DSA and Sanders) see a different path to what they consider true democracy: Organize the poor, the working class, and all other oppressed groups into what James Madison called an ‘overbearing majority.’ Such a coalition would have enough power to transfer capital to the state by ‘democratic means.'”