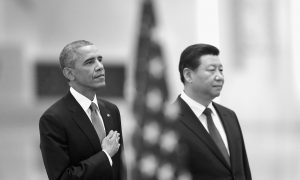 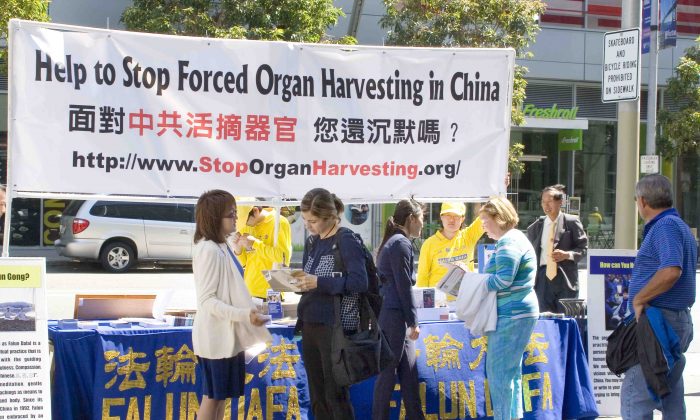 Participants in the World Transplant Congress sign a petition calling for the end of forced organ harvesting in China, on July 27, 2014, in San Francisco. (Zhou Rong/Epoch Times)
Opinion

On Oct. 30, Huang Jiefu, director of the National Organ Transplantation Committee and former vice minister of Health, announced: “Organs voluntarily donated by citizens have become the only source of organ transplants in China. Now all hospitals in China have stopped taking organs from executed prisoners. The relevant laws that will fit the current organ transplant situation are being updated and revised.”

This strong statement indicating a change in the sourcing of organs did not last long before being qualified. On the website of the popular financial magazine Caixin, where Huang Jiefu’s claim was first reported, the first two sentences were quickly changed to “Chinese organ transplantation has entered a new stage of historical development when organs voluntarily donated by citizens become the only organ source. At present, all the hospitals in China are changing past practice.”

Obviously, the original description was not defensible, and the use of voluntary donations had to be changed from an accomplished fact to a goal. As one of the top magazines in China, it’s very unlikely that Caixin misquoted or misinterpreted Huang Jiefu in making such an important claim.

The announcement on Oct. 30 has a history. It was made at the Chinese Transplant Congress, an event that took place without international transplantation organizations taking part. They pulled out because Huang had backed out in March on a previous pledge to stop using organs from executed prisoners, a pledge formalized in a document called the Hangzhou Resolution.

It appears Huang, the most important, or even the only figure to represent the Chinese regime on the issue of transplantation, has sought to reclaim with his recent statement the good opinion China briefly enjoyed in the wake of the signing of the Hangzhou Resolution.

For the past eight years, Huang has insisted that organs were from executed prisoners. Since first making this claim, Huang has made it almost every year. Every time, Huang’s claim has caused a hot debate outside China.

Nobody forced Huang to make these claims. Has anybody ever seen the regime admit any crime or mistake under international pressure besides this one? No, not ever. It’s always denial, denial, denial. It is the regime that has wanted to make the claim about executed prisoners a hot topic.

What happened eight years ago for the Chinese regime to suddenly make the claim about executed prisoners? The Epoch Times broke the story that the regime was harvesting organs from practitioners of the spiritual discipline Falun Gong.

For the past eight years, the regime would rather confess to taking organs from executed prisoners than confess to pillaging organs from prisoners of conscience. The claim was always a way to change the subject. Now the regime wants to try a different way to confuse the issue—the claim that voluntary donations are providing, or will soon provide, the needed organs.

Since the first reports on forced organ harvesting from Falun Gong practitioners, a good deal of evidence has been uncovered of these atrocities, evidence that moved the European Union’s Parliament to pass a resolution condemning organ harvesting in China and Israel to pass a law forbidding health insurance from paying for organ transplantation in China.

Recently, the World Organization to Investigate the Persecution of Falun Gong (WOIPFG) published a report that provides a new source of information about organ harvesting in China—one that is straight from the horse’s mouth.

The report analyzes more than 300 articles published in Chinese medical journals. Those papers are all about the organ retrievals. The result is astonishing. Most of the donors were very likely still alive when their vital organs were removed.

Forty-six percent of the organs were retrieved after the donors were diagnosed as brain dead, according to these papers. However, Chinese law does not recognize brain death.

This is not the only problem. According to the criteria, the clinical diagnosis of brain death must meet three criteria: deep coma, no brain-stem reflex, and no spontaneous respiration.

The last criteria must be confirmed by the apnea test, which requires turning off the ventilator for 8 to 10 minutes. That means all brain-dead patients must be assisted by ventilators. Well, from the papers, that seems not to have been the case.

Most papers described the procedures as, once the brain death was determined, the donor was immediately intubated and the organs were retrieved. Obviously, the apnea test, which must be done under intubation, was not performed on those donors.

There are only two possibilities: The brain-death diagnosis didn’t follow the three criteria, or the brain death was only an excuse. Both possibilities point to a horrible assumption—the donors were still alive when their organs were removed.

The authors of the papers offered more evidence to support the above assumption: an extremely short warm-ischemia time. Warm-ischemia time is the period from the stopping of circulation to an organ to the cold perfusion of the organ (an organ intended for transplantation is filled with cold fluid).

They were very unlikely to be executed prisoners. If their organs were retrieved at the execution sites, the descriptions in the papers don’t fit. The donors were lying on the operating tables with the anesthetist and circulating nurse (a nurse whose job is to monitor surgical procedures) present.

The early organ retrieval method couldn’t control the warm-ischemia time. That method has been described by many witnesses. Once the prisoner was shot, dead or alive, the doctors immediately pulled him into a waiting van. Each doctor grabbed the organ he was supposed to take and rushed back to hospital.

Most of the published papers described a much more professional organ retrieval environment: a surgical operating room. If the donors were truly executed prisoners, China must have changed the execution procedure. The prisoners would have to be executed on the operating tables by the doctors removing their organs. I doubt that Chinese regime would admit this crime.

Besides, the numbers of executed prisoners are not enough to provide organs for the 10,000 transplants done annually in China. According to Dui Hua Foundation, China executed 2,400 prisoners in 2013.

Considering the high rate of hepatitis B, drug addiction, sexually transmitted diseases, and even HIV among Chinese prisoners, the number of prisoners with organs suitable for transplant are far less the number executed. The description of the donors’ health condition also doesn’t fit the ordinary criminals well—healthy, no history of smoking, no drug use, no drinking, no hepatitis, and no other diseases.

They couldn’t be voluntary donors either. The first officially confirmed brain-dead donor appeared in July 2006. According to Chinese Red Cross, from March 2010 to March 2012, only 207 people in China agreed to donate their organs after death.

Up to 2010, only 60 brain-dead organ donations were recorded. Even if the 1,290 organ donors announced at this year’s Chinese Transplant Congress is true, the number is still far below the number needed in 2014. And the numbers in 2014 do nothing to explain the source for organs in previous years.

The pattern fits the pattern of organ transplant numbers well and matches the severity of the persecution of Falun Gong. The use of Falun Gong practitioners as sources for organs is one consequence of the regime’s decision in 1999 to eradicate this practice.

One day, which one may hope may come soon but may be several years from now, all organs used for transplant in China will be from voluntary donors. If so, there will still be no reason to applaud. There are many, many murder cases to be solved, and the perpetrators will need to be brought to justice.