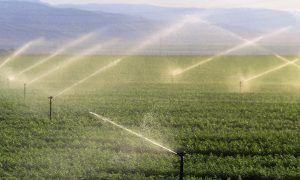 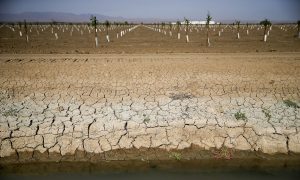 California's Water Paradox: Why Enough Will Never Be Enough
0 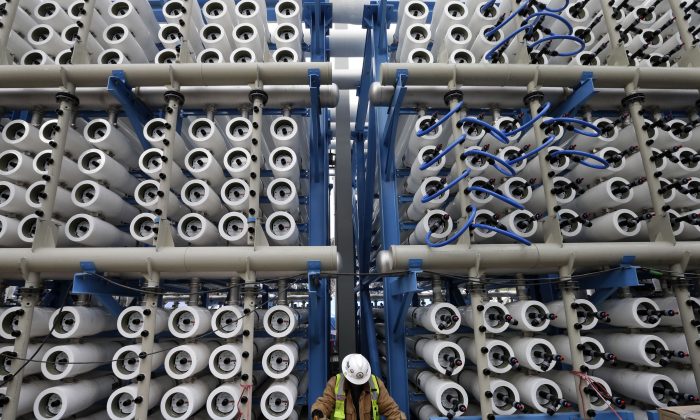 A worker climbs stairs among some of the 2,000 pressure vessels that will be used to convert seawater into fresh water through reverse osmosis in the western hemisphere's largest desalination plant in Carlsbad, Calif., on March 11, 2015. As California endures the worst drought in its recorded history, some are turning to the sea for relief. The Carlsbad Desalination Project, scheduled to start operations in late 2015, is expected to provide 50 million gallons of fresh drinking water a day. (AP Photo/Gregory Bull)
US

CARLSBAD, Calif.—There’s far more riding on the Americas’ largest seawater desalination plant than the 50 million gallons of drinking water it will produce for the San Diego area each day.

The plant, which opens this year, will help determine the future of seawater desalination in the U.S. The billion-dollar project is only the nation’s second major seawater plant. The first U.S. foray in Tampa Bay is widely considered a flop.

San Diego County Water Authority officials vowed to “Tampa-proof” their effort, tapping experienced builders and getting developer Poseidon Resources LLC to shoulder much of the risk.

Carlsbad is already off to a better start than Tampa: Initially expected to open next year, it is well ahead of schedule.

The largest seawater desalination plant in the Americas opens this year in Carlsbad, a suburb of 110,000 people north of San Diego. Poseidon Resources LLC will supply about 8 percent of the San Diego region’s water under a 30-year contract with the San Diego County Water Authority.

How does the plant stack up globally?

Carlsbad will produce 50 million gallons of drinking water a day, ranking 49th on the International Desalination Association’s list of largest seawater plants, behind a dozen each in Saudi Arabia and United Arab Emirates. The world’s largest, on the Red Sea in Saudi Arabia, produces up to 232 million gallons daily.

It will be the largest seawater plant in the U.S. by far. The second-largest, in Gibsonton, Florida, on Tampa Bay, has a capacity of 25 million gallons a day but is currently producing much less.

Why hasn’t seawater desalination caught on in the U.S.?

The world’s largest economy has embraced desalination of brackish water, which is less salty than seawater and often found in estuaries and aquifers. But seawater treatment has been slow to catch on.

Technical and financial problems beset the plant in Tampa before it opened in 2007, diminishing appetite for similar efforts.

Cost has been a stumbling block. The San Diego County Water Authority will pay between $2,131 and $2,367 for an acre-foot of water, depending on how much it buys. That’s more than double the $942 it will pay the Metropolitan Water District of Southern California for imported water and will raise the average monthly household bill about $5.

What about environmental harm?

Fish and other marine life are killed or injured when ocean water presses them against intake screens, which is called impingement. Smaller organisms, including fish eggs, plankton and larvae, die later in the process, called entrainment.

Impacts vary by plant. To offset entrainment in Carlsbad, Poseidon is restoring 66 acres of wetlands on San Diego Bay.

To protect marine life, new rules in California give preference to plants whose ocean intakes are under sand. The state also set limits on salt concentrations of water that is discharged back into the ocean.

Developers of seawater plants have set their sights on California, Texas and Florida.

Poseidon is pursuing a plant in Huntington Beach, California, that would sell 50 million gallons a day to the Orange County Water District, positioning the Los Angeles suburb as the next battleground. There are 16 proposals in California, according to the State Water Resources Control Board.

The city of Santa Barbara is upgrading a plant that has been mothballed for years and will produce about 3 million gallons a day when it reopens in October 2016. The plant is exempt from California’s new rules because it was built in the early 1990s.