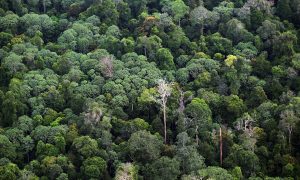 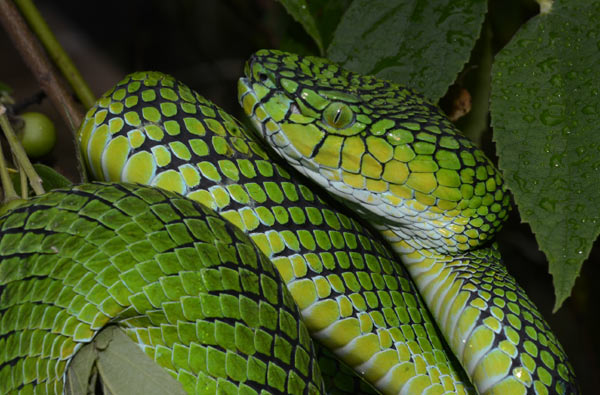 A new pit viper was discovered by researchers working in Sumatra, Indonesia, and described in a new study in Amphibian & Reptile Conservation. The reptile was identified by a group of chemists and herpetologists comprised of Gernot Vogel, Patrick David, and Irvan Sidik. The viper, named Trimeresurus gunaleni, was identified by the researchers while they were studying a group of Trimeresurus sumanatrus, first described by Sir Thomas Stamford Raffles in 1822.

“It’s a surprising finding,” Dr. Vogel told mongabay.com, “as [the new species] is a large viper, very colorful and superficially different.” It inhabits forested areas between 1,500 and 2,000 meters (5,000 to 6,500 feet) in elevation. This is an important difference from T. sumatranus, which lives on lower, hilly areas rarely above 950 meters (3,000 feet).The difficulty in accessing these high mountain areas, as well as lack of economic interest in developing them, has preserved them from deforestation, according to a 2011 study in Global Change Biology.

“This is a highland species and in Sumatra there is little infrastructure in the higher mountain areas, so I feel it might be safe in the near future,” Vogel said. However, he cautioned its safety is far from secure, saying that its distribution should be more thoroughly studied to help further understanding of the species and its long-term prognosis. He added the region itself deserves more attention, with more endemics possibly awaiting scientific discovery. Vogel, who has discovered other reptile species, is a freelance herpetologist as well as a chemist whose research is self-funded and not tied to any particular institution. For their study, the researchers inspected 53 specimens of T. sumatranus and Trimeresurus hageni, with the primary objective of establishing the differences between them and amend the historical confusion of these two species.

During the examination of the T. sumatranus specimens, Vogel and his team found that seven of the samples presented systematic and significant differences, such as size and color of the eyes and tail.

One of the factors that, in Vogel’s opinion, has led to the confusion of these species is the excessive use of molecular methods for reptile identification.

“People nowadays rely very much on molecular methods,” he said. “But in fact you must know the species before you start molecular work, because otherwise this work might come to the result that all is the same. Just because you failed to get the new forms.”

The new species was named after Danny Gunalen, a breeder and photographer based in Jakarta, Indonesia. Gunalen, who conducts regular field trips to less accessible areas of the country to survey reptiles’ conservation state, was the one who captured the first specimen after it was recognized as a distinct species.

“We went [to T. Gunaleni’s] habitat high up on the cool mossy forest, on a search expedition,” Gunalen said. “It resulted [in] the discovery of alive specimens never documented before.”

According to Vogel, many more “new” species may be lying undiscovered in museum collections.

“I still think that we did not apply the old methods to all groups. So we get the picture that in some groups we are going very much into the deep, in others we scratch at the surface, as there has been no review for 100 years or more,” Vogel said. “This is especially true for Southeast Asian herpetology. The collections are full of treasures which were never really worked out and on the other side some groups are investigated with much time and manpower.”