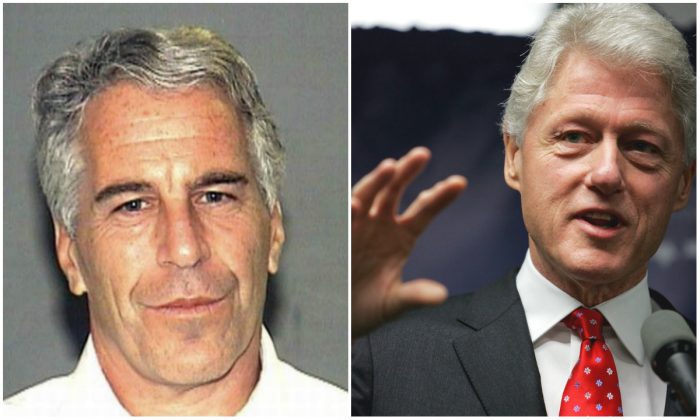 The picture was published on Twitter by a number of people, including author Joshua Rosner, and shows Clinton and Epstein smiling and posing in Brunei in 2002.

The picture was published in Vanity Fair magazine as part of a March 2003 story. That story is online but the picture is not included. A version of the story in Vanity Fair’s digital archive, which requires a subscription, still includes the picture, according to Snopes.

Clinton said recently he flew on Epstein’s plane for a total of four trips and visited the financier’s infamous New York City mansion once. Flight records indicate that the former president took 26 jaunts on the plane in 2002 and 2003, many times with underage girls. Clinton also said that he had no knowledge of Epstein’s alleged abuse. Epstein was not charged until 2007.

Disturbing! The #press wiped all pictures of ⁦@BillClinton⁩ & #JeffreyEpstein from the #internet. Even ⁦@VanityFair⁩ who published this image in ‘03 from their #sex(?) trip to Brunei scrubbed it. #sycophant #power ⁦@CJR⁩ ⁦@theintercept⁩ ⁦@propublica⁩ pic.twitter.com/MmCZZraHai

Meanwhile, files from the Clinton administration uncovered by the Daily Beast show that Epstein donated $10,000 to the White House Historical Association and attended a reception for donors that was hosted by Clinton and First Lady Hillary Clinton.

A source told the outlet that Epstein visited Mark Middleton, an aide to the president, several times at the White House. Middleton did not respond to requests for comment by the Beast.

A letter written by businesswoman Lynn Forester de Rothschild to Clinton after a brief meeting at the White House mentioned Epstein.

“Dear Mr. President: It was a pleasure to see you recently at Senator Kennedy’s house. There was too much to discuss and too little time. Using my fifteen seconds of access to discuss Jeffrey Epstein and currency stabilization, I neglected to talk to you about a topic near and dear to my heart. Namely, affirmative action and the future,” wrote the businesswoman, who spent the first night of her honeymoon in the White House and was described in a long profile as “a longtime friend” of the Clintons.

She said that then-White House adviser and current ABC News anchor George Stephanopoulos asked her to write a memo about what she wanted to talk about.

Stephanopoulos attended a dinner at Epstein’s New York house in 2010 after Epstein was released from prison. Epstein pleaded guilty to two counts of soliciting prostitution in 2008 in a plea deal that saw charges including molestation dropped.

Stephanopoulos recently admitted he was at the dinner and said attending it was a mistake.

A number of other media and Hollywood personalities were present at the dinner, which featured Britain’s Prince Andrew, Katie Couric, and Woody Allen.

While it was recently reported that Epstein was connected to Clinton by Ghislaine Maxwell, a British woman who was reportedly Epstein’s girlfriend for a spell, in the 2000s, the links to the Clinton White House show Epstein was involved with the family much earlier than that.

It had already been noted that Clinton dined with Epstein in 1995 in Palm Beach, Florida.

Maxwell was also at the 1993 donors dinner, according to the invitation list.