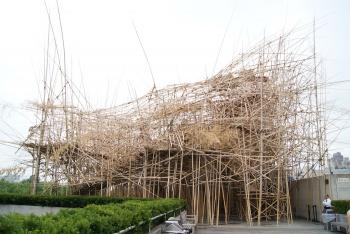 Susan Tan
View profile
Follow
biggersmaller
Print
NEW YORK—The second phase of the 50-foot-tall Big Bamboo installation was previewed on Monday at the Metropolitan Museum of Art ahead of its Tuesday opening.

The artwork was created by identical twins Doug and Mike Starn, 48 and New York City natives. They have been collaborating as artists since they were in their teens. The artwork was started on April 27 and estimated completion is Oct. 31.

The idea for the artwork came while they were doing an art installation at the South Ferry Station, following the devastating 9/11 terrorist attacks.

“This project for the MTA took five years to do. There were hundreds of people working on it. And it sort of opened up our eyes to a different way of making art, including more people,” according to Doug.

“Big Bamboo” embraces the concept of organic art and incorporates the vision of a living organism that is constantly changing. The structure of the installation is constantly being built with workers there each day at the museum.
“It is a microcosm. … Microcosm means ‘little world.’ And in the Renaissance, they used this term to talk about the universe, and that human beings are really a microcosm of the universe, with all its variety and its contradictions,” said Mike.

The building materials for the installation were previously going to be metal. But considering the cost and danger of metal, they gave up the attempt and decided on bamboo as a building material. Large bamboo stalks came from Georgia, and small ones came from a plantation in South Carolina. They employed members of a local rock climbing club for the construction, since they are not afraid of heights.
In the months to come, the crew is going to stretch out the expanse of the rooftop and construct the outer layer of the structure. The structure is constructed from bamboo, nylon rope, and a few saws. The nylon rope comes in a variety of colors to liven up the structure with more color.

Set against the backdrop of Central Park and Manhattan skyscrapers, the structure gives a clear bird’s eye view of New York City.