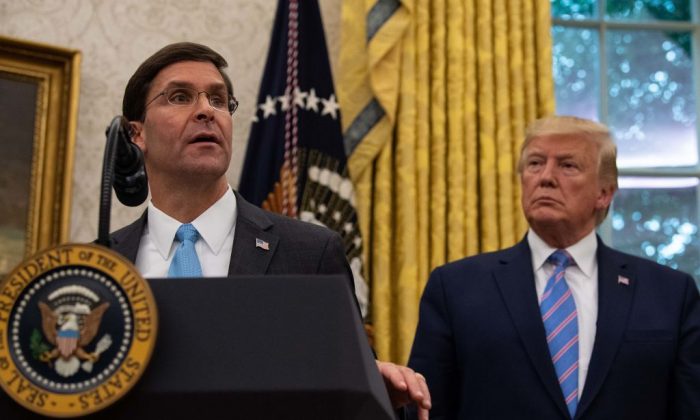 US Defense Secretary Mark Esper speaks after he was sworn in as President Donald Trump looks on in the Oval Office at the White House in Washington, on July 23, 2019. (Nicholas Kamm/AFP/Getty Images)
US-China Relations

Former Secretary of the Army Mark Esper has been confirmed as the new U.S. secretary of defense following a Senate vote, ending a more than seven-month vacancy at the Pentagon. How he will deal with the military threat from China is now under close scrutiny.

The U.S. Senate confirmed President Donald Trump’s nomination by a vote of 90–8 on July 23. Prior, the Pentagon had been without a permanent boss since Jim Mattis resigned in December last year. Since then, Deputy Secretary Patrick Shanahan has been the acting secretary, but he withdrew from the nomination process in June.

Esper served in the Army’s 101st Airborne Division and took part in the first Gulf War. He retired in 2007 after 10 years on active duty. He later became the deputy assistant secretary of defense for negotiation policy during the George W. Bush administration.

Before he became secretary of the Army in 2017, Esper was a lobbyist for Raytheon, one of the country’s largest defense contractors.

“Nations around the world, including China and Russia, continue to make strategic and technological advancements to their military readiness. It’s essential that our nation doesn’t fall behind when it comes to investing in our national security,” Thune said.

Thune added that Esper’s extensive experience in foreign affairs and defense policy will “strengthen our military and keep Americans safe.”

Esper has been vocal about the potential threats posed by China—and what he perceives as the United States’ past failure to take those threats seriously.

“We may be a little bit late—we are late—coming to the recognition that we are in a strategic competition with China,” Esper said in an April interview with Reuters.

Esper added that he had witnessed the “evolution” of China’s capabilities over the past 20 years.

“Today, Russia and China are aggressively developing formations and capabilities and weapons systems that deny us that long-held advantage,” he said.

On June 24, Beijing responded to Esper’s confirmation. Chinese media reported that Wu Qian, China’s defense ministry spokesperson, said at a press conference that he hoped the military relationship between China and the United States would grow steadily under Esper.

Esper’s confirmation will have a direct impact on three U.S. allies in East Asia—Taiwan, South Korea, and Japan—all of them dependent on U.S. military support in the face of potential Chinese military aggression in the region.

In Taiwan, local media have been quick to point out that Esper publicly supported U.S. arms sales to the island for its self-defense, during his confirmation hearing before the Senate Armed Services Committee on July 16.

The United States currently has no formal diplomatic ties with Taiwan, since Washington changed its diplomatic recognition in favor of Beijing in January 1979. Since then, the United States has maintained a non-diplomatic relationship with Taipei, in which it’s the island’s main arms supplier.

Taiwan’s chief military threat comes from China, which considers its democratic neighbor a renegade province that should be united with the mainland, with military force if necessary.

Esper said at the hearing that he’s “deeply concerned about China’s failure to renounce the use of force against Taiwan and increasing PLA [People’s Liberation Army, China’s military] exercises and operations in the vicinity of Taiwan.”

He added that he would ensure the United States would “resist any resort to force or other forms of coercion that could jeopardize the security, or the social or economic system, of the people on Taiwan.”

Meanwhile, South Korea’s defense minister Jeong Kyeong-doo has spoken by phone with Esper since his confirmation, South Korean media Yonhap News Agency reported. The two affirmed their commitment to a strong alliance, as well as diplomatic efforts for the denuclearization of the Korean Peninsula.

South Korea’s defense ministry, in a press release, said the two defense chiefs “expected to have a chance to meet in person soon,” according to Yonhap.

Just prior to Esper’s confirmation, Japanese media reported that Esper would visit Japan in early August.

Citing anonymous sources familiar with the plan, NHK said that Esper would travel to Japan for a two-day visit beginning Aug. 6, as part of a five-nation tour that will also include stops in South Korea and Australia. He is expected to meet with Japanese Prime Minister Shinzo Abe and Defense Minister Takeshi Iwaya, NHK reported.

The Pentagon has yet to confirm the trip.