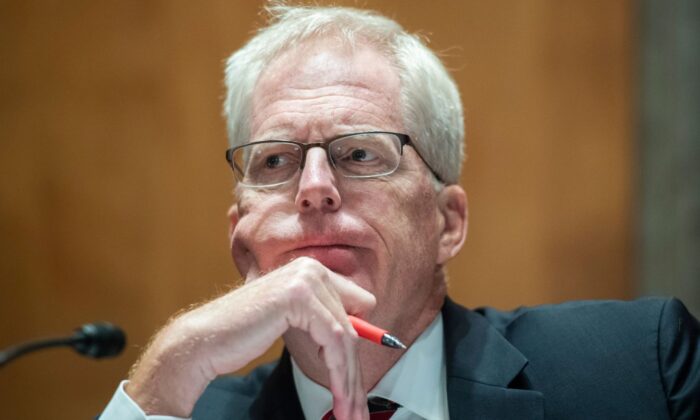 The new head of the Department of Defense (DoD) said Friday that the U.S. military hasn’t been compromised in any way since President Donald Trump fired former Pentagon chief Mark Esper several days after Election Day.

“I want to assure the American public and our allies and partners that the Department of Defense remains strong and continues its vital work of protecting our homeland, our people and our interests around the world,” Acting Secretary of Defense Christopher Miller said while meeting with his Lithuanian counterpart.

He was named to the position on Nov. 9 after Esper’s departure. Miller is a former special forces officer and counterterrorism specialist.

“I want to thank Dr. Anderson, Admiral Kernan, and Jen Stewart for their service to the nation and the Department,” Miller said. “Over their careers each has contributed greatly to the national defense and the future of the Department of Defense. We wish them the best in their next endeavors.”

As for Miller, he wrote an opinion piece in mid-October along with Doug Livermore that called for U.S. Army Special Forces to “go back to basics against China and Russia.”

“A refocus on increased unconventional warfare capability will both allow for greater deterrence to prevent a war with China and Russia or, failing that, provide the United States and its allies with the means to drastically increase the cost and difficulty by which adversaries might pursue such aggression,” Miller and Livermore wrote before making mention of former President John F. Kennedy’s famed quote on unconventional or asymmetrical warfare.

“There is another type of warfare—new in its intensity, ancient in its origin—war by guerrillas, subversives, insurgents, assassins; war by ambush instead of by combat, by infiltration instead of aggression, seeking victory by eroding and exhausting the enemy instead of engaging him,” the article quoted JFK as saying. “It preys on unrest.”

Last week, Trump announced Esper’s termination on Twitter. He did not elaborate on why Esper was let go from the agency.

Esper, meanwhile, wrote (pdf) to his staff that it has been an “honor and privilege of a lifetime” to serve as Pentagon chief.

“Together, we have made solid progress implementing the National Defense Strategy by modernizing the force, improving its readiness, strengthening ties with allies and partners, and reforming the Department to make it more efficient,” he wrote.

The recent shakeup at the DOD drew criticism from Democratic lawmakers.

“Whatever the reason, casting aside a Secretary of Defense during the volatile days of transition seems to neglect the President’s most important duty: to protect our national security,” wrote Rep. Elissa Slotkin (D-Mich.), a former CIA analyst and Pentagon official, on Twitter.