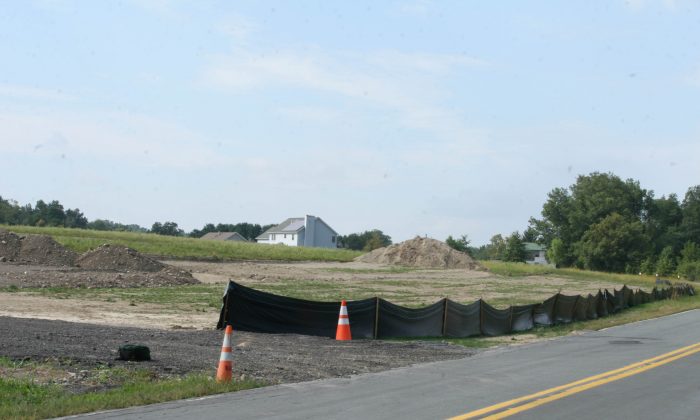 A view from across Ryerson Road of the unnamed park in Wawayanda on Sept. 9, 2015. (Holly Kellum/Epoch Times)
New York

NEW HAMPTON—There isn’t much to see on Ryerson Road in New Hampton right now, but a few months from now part of it will start to look more like what it will eventually become—a park.

The Town of Wawayanda purchased 76 acres of old farm land there last year and have preliminary plans to develop it with a baseball field, a pavilion, and a play area.

As for what else is going to be there, Wawayanda Supervisor, John Razzano, says he is envisioning nature trails and maybe another sports field, but all that will be decided after public input.

Right now there are bulldozers working on a Little League field next to the road, which Razzano says will hopefully be finished by snowfall. As for the rest of the construction, it likely won’t start till next year he said.

The park is located right across from the Middletown Islamic Center and near some houses on Ryerson and McVeigh Roads, one of the reasons the town chose that location.

They also chose it because the park runs near the old Erie Railway track, which could eventually become an extension of the Heritage Trail that runs between Goshen and Monroe.

The Town of Wawyanda passed a resolution in 2006 stating it supported the extension of the trail from Goshen to Middletown and would allow the Orange Heritage Trail to pass through the Town of Wawayanda.

Discussion on bringing a park to the eastern part of Wawayanda dates back to the late ’80s, Razzano said. There is a park on the western side of the town, Shannen Park, but there is no park on the eastern side. This park on Ryerson Road would be for the easter part of town.

To offset the $500,000 the town paid for the land, some lots along the southern end of the park will be sold for development.

When asked what the name of the park will be, Razzano said it is internally being called the New Hampton Park or the Ryerson Park, but a lasting name has yet to be chosen.

He said the town was looking for a donor for the land, and if they had found one, like they did with Shannen park, the name of the park would have been a no-brainer.