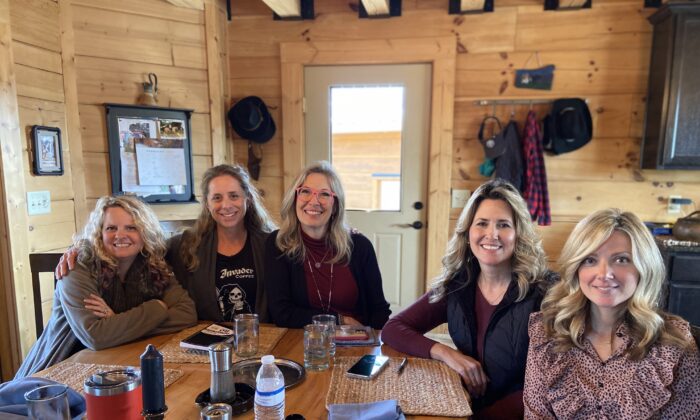 A newly formed political action committee (PAC) in North Carolina is gaining traction ahead of the May 17, 2022, primary with a slew of staunch conservative candidates who have pledged an unwavering commitment to the U.S. Constitution and the state’s founding documents.

North Carolina Grassroots Government (NCGG), formed in 2022, has endorsed 40 candidates in the Republican primary with the goal of rooting out incumbent politicians who, NCGG says, aligned themselves with Democrats and failed North Carolinians over the past two years.

“Every single NCGG-endorsed candidate is absolutely committed to the tenets of medical freedom and reversing the non-action, and the action, of both parties for the last two years that has literally stood down and allowed evil to reign in North Carolina and our country,” Tara Niebaum, an NCGG volunteer, told The Epoch Times.

NCGG seeks out North Carolinians to run for office on the Republican ticket. Potential candidates must complete a survey to ensure that they align with NCGG’s platform of 10 principles, 10 promises, and one covenant. If selected for endorsement, each candidate is required to swear an oath that they will uphold the 10-10-1 platform throughout their candidacy and for their entire term of office.

“One of the things we keep telling people is if you vote for any of the incumbents who stood down for the last two years, or actively worked with [Gov. Roy Cooper] and the federal government to implement these kinds of public health policies, we are going to have two more years of the same,” Niebaum said. “At the end of the day, I truly do believe that these primaries are going to be the most significant primaries America has ever had. They will determine the trajectory of this nation.”

“This speaks volumes to where people are,” Mindy Sportsman, an NCGG volunteer, told The Epoch Times. “NCGG speaks to disgusted Republicans, Democrats, and unaffiliated voters who want biblically-based, constitutionally-based candidates of strength, character, and conviction.”

Sportsman and Niebaum advocate for health freedom and education with their website and podcast, “2 Citizen Moms.” Together with Aryn Schloemer of Revival In Courage, a North Carolina constitutional-rights organization, the women networked their resources to help NCGG.

Within a climate of vaccine mandates and school board authoritarianism, candidates seeking NCGG’s endorsement are questioned on medical freedom, parental rights, educational freedom, traditional marriage, Second Amendment rights, and the sanctity of life, among many other issues.

If endorsed by NCGG, candidates must vow to enact laws defunding and prohibiting legislation for vaccine mandates and the accompanying vaccine passports, certificates, databases, and digital IDs.

From the perspective of NCGG, Republicans have sided with Democrats on too many critical issues, from pro-abortion legislation to what Niebaum called “Communist public health policies.”

In other words, they have become RINOs (Republicans in name only), a term often used to highlight the stark contrast between former President Donald Trump’s “America First” policies and establishment Republican policies such as the Patriot Act, an invasive expansion of government surveillance enacted under former Republican President George W. Bush.

“The vast majority of the Grand Old Party resemble uni-party Marxism more than the Christian conservative principles they campaign on,” Schloemer told The Epoch Times. “North Carolina citizens had found themselves abandoned by their party, with no viable option, until NCGG.”

According to Niebaum, NCGG was born because both the Republican and Democratic parties untethered themselves from the biblical principles that she said framed the Constitution.

“Historically, it seems that every political compromise has been made by those on the right until 2020 when it became apparent that the right had taken so many steps left, there was almost no distinction between two parties,” Niebaum said. “Both parties were complicit in allowing some North Carolinians to be labeled essential and others nonessential. Both Republicans and Democrats alike voted to mask us, test us, track us, and trace us, working collaboratively to implement Communist public health policy.”

Both parties stood down while the governor closed churches, thus violating the U.S. Constitution, the state constitution, and the First Amendment, she said.

The founders of NCGG and the endorsed candidates running on the platform commit to the affirmation of the inalienable rights of the individual, believing that the role of government is to protect the individual from “immoral and unconstitutional overreach in all sectors,” Niebaum said.

“The thing that sets NCGG apart from all other grassroots groups and certainly all other PACs is our focus on supporting Christian constitutional conservatives versus Republicans who often vote no differently than Democrats,” Niebaum said. “Our candidates go through an intense vetting process in which they are asked about their personal relationship with Christ and their knowledge of the Bible.”

Endorsed candidates, Niebaum said, whether they’re running for school board or Congress, must be unapologetically Christian and—if elected—must affirm to vote for legislation that reestablishes constitutional governance rooted in Judeo-Christian values.

Kenneth Harper, an NCGG-endorsed candidate, is running for U.S. Senate to represent North Carolina on the ballot in the Republican primary on May 17, 2022.

Sen. Richard Burr (R-N.C.) said he would not seek reelection in 2022, leaving Democrats and Republicans to begin running for the open Senate seat.

Harper is on the primary ballot with high-profile Republican candidates such as former Gov. Pat McCrory and 13th Congressional District Rep. Ted Budd.

Harper told The Epoch Times that he found himself on the path to running for U.S. Senate by “responding to a spiritual call.”

“I am a Christian, and I truly believe I heard a call from the Lord to enter into the race,” Harper said. “That’s been a little over a year ago, and since I’ve campaigned in 60 counties and have been endorsed by North Carolina Grassroots Government.”

Harper cultivated a relationship with NCGG, initially through the message of his campaign that brought him to NCGG’s attention, he said, and later through the vetting process that involved filling out three surveys to qualify for NCGG’s endorsement.

Protecting the inalienable rights established in the Constitution, his campaign, and his Christian faith are each interconnected, he said.

“I refuse to separate them,” Harper said.

Thwarting the Voice of the Electorate

Harper has been raising money from individual citizens, he told The Epoch Times. In doing so, Harper has faced the reality of candidates being marginalized because of the level of fundraising reached through grassroots efforts that ignore high-dollar PAC endorsements.

“This is not what the political process is about because when you are using partiality as it relates to who can speak, you are thwarting the voice of the electorate,” Harper said.

He said the practice of only allowing candidates to speak if they have raised a certain amount of money contributes to the source of the current plutocratic system of government in which only the wealthy elite can have a voice.

During his campaign, some organizations have not allowed him to speak at their events because of his level of fundraising.

For one senatorial debate, Harper needs a minimum of $50,000, he said.

“Right now, I’m at a threshold of about $35,000 of grassroots money,” Harper said. “Now, if they would allow me to count in-kind contributions, I would be at their threshold, but there are all of these rules that block grassroots candidates from being able to participate on the big stage with other candidates.”

Harper referred to himself as a “recovering Democrat” who shares NCGG’s viewpoint that the Republican and Democratic parties have fallen from their former ideals and sunk into a swamp of Marxist ideologies that trespass on the Constitution.

Harper said he could no longer align with the Democratic party because of its support for policies that he said violate the sanctity of life and marriage and inalienable rights.

“Americans need to usurp the arbitrary power the federal government has taken upon itself and put it back in the hands of the people,” Harper said.

Another NCGG-endorsed candidate is Matt Ansley, who is running for state Senate.

“Matt Ansley is the very essence of ‘the why’ for NCGG,” said Schloemer. “Bringing the receipts to light on what Republican leadership, alongside Democrat governor Roy Cooper, passed during the last two years, proves beyond a shadow of a doubt the need for our own [North Carolina] moral reset. Revealing their voting records, and legislation killed under their watch, motivated everyday folks to step up and run to replace them.”

In an interview with NCGG, Ansley said that through the course of 2020 and 2021, he made the decision to run for office based on two key events: one being Gov. Cooper’s shutting down churches by executive order “with no objections from current Democrat or Republican legislators,” and witnessing Republican lawmakers promoting COVID-19 vaccines “that either contained aborted fetal tissue or was derived from aborted fetal tissue research, which is inconsistent with my Christian faith and pro-life position.”

Whether a single NCGG candidate makes it through the primaries, much less through the general election to be sworn into office, is yet to be seen, Niebaum said.

“Man’s idea of success and God’s idea of success are usually opposing pictures,” Niebaum said. “If we accomplish nothing more than elevating the conversation and giving voters the option to vote for Christian-citizen statesmen instead of establishment RINOs and incumbents who have sacrificed our freedom and failed to uphold their oaths to the Constitution and their sacred duty to the Creator, we will have changed the game.”