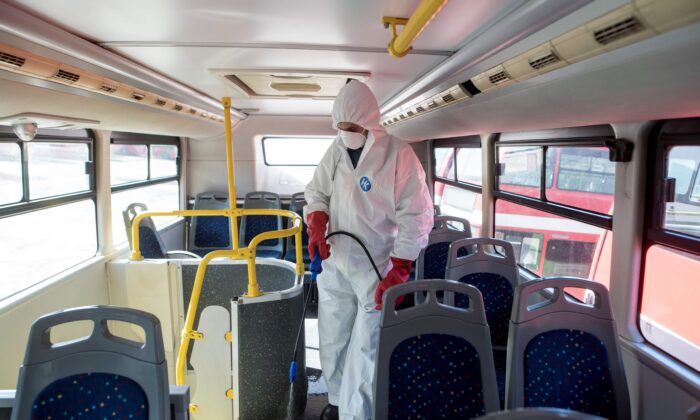 A worker disinfects a public bus against COVID-19 in Skopje, North Macedonia, on Feb. 29, 2020. (Robert Atanasovski/AFP via Getty Images)
AMERICA

A 39-year-old woman died just days after she was tested for COVID-19 and had initially turned down a test because she believed she was at lower risk due to her age and health, according to her boyfriend.

Natasha Ott, a healthcare worker in Louisiana, was tested on March 11 for the flu because she didn’t want to take a test for the CCP virus since supplies are limited and thought someone else should get the test, according to KNOE.

She was later tested for the CCP virus days later on March 16. But according to Josh Anderson, she was found dead on March 20.

The results for the test have not yet come back, he said, adding that there is no evidence that her death was caused by COVID-19 but hopes that it is a wake-up call for the community for the potential human cost of the disease.

Before Ott took the test, she was suffering from flu-like symptoms, Anderson told KATC. Ott told Anderson that she felt “something in her lungs,” and a day later, she was found dead.

“For those of you not fortunate enough to have known her—know this: it’s an immeasurable loss. And seeing a woman I knew to be so full of life lying on the floor lifeless was devastating,” said Anderson. “I was afraid to touch her. I held her anyway.”

Anderson said that both he and Ott believed that younger people would be fine.

“I believed that people should stay home, but I don’t think I fully understood what the consequences could be if they didn’t,” Anderson said, according to KATC.

Natasha Ott worked for Crescent Care, which confirmed she was a former employee who later died.